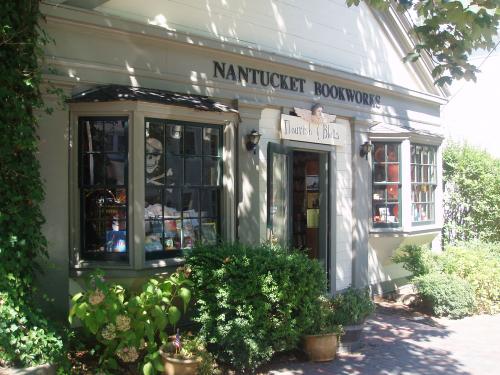 Patty Claflin opened Nantucket Bookworks in 1972. The original location of the store was the basement of the Mooney Building (which now houses Town offices) on the corner of Federal and Broad Street. Specialties of the time were paperbacks and chess, and one can easily imagine the colorful characters that would hang out among the pine shelves. Key staff, including the owner, would leave at night to wait tables or bartend at the Brotherhood of Thieves.

Next door to the Brotherhood, 25 Broad, built circa 1880, had been at various times a residence, a doctor's office, and a store selling trendy canvas sailor's shirts, before ending up as the Brotherhood's band house.  In 1972 Artie Krause decided to sell the building and let the musicians bunk with their friends. He convinced Patty and Prenny to buy the building and make the move across the street.

Despite the impending birth of their first child, the Claflins intrepidly hauled boxes up Broad Street. Patty's water broke, Ned was born, and the rest is history. Shelves from the basement fit like a charm in the new building, walls were removed to make it more storelike (hence our now-bowed roofline... the wall/support thing wasn't perfect!).

Current owner Wendy Hudson had loved the store since about age 12, when she discovered it during a summer trip when her family sailed to the island from the Cape aboard her grandparents' boat. She recalls wandering into the back room and having her heart skip a beat or two, for there were so many cool toys and it all felt so secret.

Years later, Wendy came to the island during college (after a semester at Williams-Mystic, where she read Moby Dick among other nautical works). She worked at Bartlett's Farm on the farm truck, fell in love with town, and spent many waking hours in the store. Then she fell in love with a guy, started a brewery with him, and had a family. During all this excitement, the Claflins decided to sell the store and her real dream came true.

At the stroke of midnight at the turn of the Millennium, Prenny turned to Wendy (at a brewery party no less) and said "Effective immediately, it's all yours!!!" They let me in on all their secret sideline sources and taught me how to keep business as usual, which was exactly the way I liked it.

Nine years later, we're tweaking things here and there to stay with the times, and we don't know what the future will hold given the changing world we find ourselves in. Digitization, the economy, the environment... what would a girl do if she couldn't learn about it all and read a novel to relax afterward. : ) With any luck, the books in the store and the friends we've made along the way will teach us everything we need to keep our cozy little bookshop going another 30 something years and beyond.