A Walk Around Nantucket Coloring Book

"A Walk Around Nantucket" is a stunning coloring book for adults created by Scott Widmeyer and Alan Yount and illustrated by local artist Paul McCarthy from Nantucket Carving and Folkart.

A 54 page book that includes 19 iconic scenes from around Nantucket (the three lighthouses, a typical Sconset cottage, the Crooked House in Madaket, the Windmill, and many others).  And the pièce de résistance with the Nantucket coloring book is that it will include 16 post cards with exquisite Nantucket scenes also ready for coloring. “Our book is of, by, and for Nantucket, and we are so excited to share it with the community,” noted Widmeyer and Yount.

Adult coloring books have become a popular way to relieve stress and calm down in our digital world of instant gratification. We hope that A Walk Around Nantucket will help visitors and residents alike tap into their inner artist, slow down, and see the island in a new way. The postcards included at the end of the book will let you send your vision out to your friends, opening their eyes to our beautiful little island.  So, sit down, turn your phones and computers off, and take “a walk around Nantucket” with your colored pencils, markers, watercolors, or any other medium.

Some of the creator's proceeds from the sales of the Nantucket Coloring Book will go back to the Island's Indepdendent Bookstores Mitchell's + Bookworks!

Thirty miles out to sea is the island of Nantucket. Over half of the land has been conserved and remains undeveloped for all residents and visitors to enjoy. These seven hikes were chosen for their natural beauty, historical significance, or connection to the island's natural habitat. The hikes range from half a mile to 3 miles. Each trail includes simple directions, a brief history, and questions for children on nature and subjects of interest about Nantucket.

Order an Autographed Copy of Maisie and the Nantucket Daffodil Parade!

This is the story of Maisie, an antique car that was left abandoned and forgotten in an old red barn in Western Massachusetts. She is given to a lady who tows her to Nantucket Island, repairs her, decorates her and takes her in the Nantucket Daffodil Parade. Maisie is scorned by the fancy antique cars that are in the parade, but because of her wonderful attitude and endearing spirit, she is loved by the crowds and becomes the hit of the parade despite her weatherworn condition.

- Nantucket style features a high-end island lure and many design creations, and this book's major appeals are for those who love home, fashion, luxury, sailing, surfing, and designer photography- This stunning book features gorgeous photographic portraits and environmental shots of islanders in their homes and leisure pursuits, as well as illustrations of elements that shape signature Nantucket a

Stella Wright loves creating candles at her Nantucket store—and she also has a burning passion for justice. Now, after visiting a perfume conference, she must solve a vial crime . . .

ISBN: 9781475204421
Availability: Ships from our supplier - you choose to your home or to the store
Published: Createspace Independent Publishing Platform - June 26th, 2012

"Reinemo's Fishing Nantucket is the definitive journal on fishing the Island. He covers every aspect of the sport from where, when, how, with what - species by species and month by month. The priceless information is dead on and extends far beyond the shores of Nantucket and even New England. 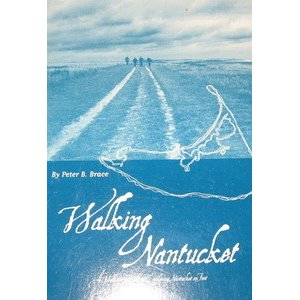 A much-needed, beautifully illustrated and researched guide to exploring the island's open spaces with a brilliant tour guide in hand.

"Not only does Peter identify many great walks on the island, he also provides interesting historical and ecological information that will make your walks much more rewarding." -Eric Savetsky, Executive Director of the Nantucket Islands Land Bank

A book about a tiny island with a huge history, from the New York Times bestselling author of Valiant Ambition and In the Hurricane's Eye.

“For everyone who loves Nantucket Island this is the indispensable book.” —Russell Baker

Out of the Wild Night (Paperback)

From the New York Times bestselling author of Chasing Vemeer comes an unforgettable story about an island haunted by the past... and the ghosts who must help with the present.

Ghosts are alive on the island of Nantucket. You can hear them in the wind, and in the creaks of the old homes. They want to be remembered.

Nantucket Island, off coastal New England, has always been a cherished vacation destination. On a given summer day the population swells to more than forty thousand people. The summer months bring a steady stream of visitors who flock to the extraordinary beauty and history of Nantucket's shores, its clear skies, and its southwest breezes.

Imagine a place of unspoiled beaches, windswept dunes, and dramatic natural beauty. A place free of traffic lights and blaring commercial come-ons. A place whose rich historical heritage is visible everywhere—from the antiques-shop windows filled with handmade baskets and scrimshawed ivories to the spare, shingle-clad houses that coexist harmoniously with the surrounding land- and seascapes.

This small-format book captures on each page a new colorful image that lets you relive your visit to Nantucket for years to come. This treasury of images captured on the quaint and beautiful little island 30 miles south of Cape Cod covers every corner of the island. Walk along the harbor, climb the church tower, and stroll around the town as you enjoy sites that you will remember from your visit.

A cookbook that captures the laid-back, but elegant lifestyle of Nantucket and the wonderful dishes of its locals' and tourists' favorite CRU Oyster Bar.

CRU Oyster Bar’s casually stylish cuisine is an ode to the ocean, local farms, and the seasons, served in a beautiful setting on Nantucket Harbor.

Andrew Russell, the 46th President of the United States, his wife and their two young children have brought back a Kennedy-era feeling of Camelot to the White House.

On This Day in Nantucket History (Paperback)

Nantucket is much more than beautiful beaches and sailboats. One day at a time, author Amy Jenness offers up quirky and fascinating stories of the people and events that shaped this remote island. On August 11, 1841, Frederick Douglass made his first antislavery speech at the Nantucket Atheneum. The Great Fire of July 13, 1846, devastated the island, forcing residents to rebuild what they lost.

Sarah Leah Chase, co-author of The Silver Palate Good Times Cookbook, knows that summer means long, lazy days of fun and getting together, of throwing the doors open and inviting over everyone you know for the pleasures of good company and good food.

This new, updated and freshly-revised edition of the original MUSKEGET leads us once again into that pristine, raw and restless Nantucket island populated by an amalgam of different species, shore birds and mammals, where overpopulated gray seals fight for island dominance, their relentless presence not only damaging rare flora and fauna, but also attracting the ever-dangerous and much-hyped threat of killer sharks surrounding Cape and island waters, imperiling both themselves and humans.
It is a different journey into Muskeget this time. This new edition highlights the island's stark future, as relentless climate forces aggravate its declining natural beauty. The rugged pounding of insistent winds, tides and currents, compounded by sea rise, are regularly and roughly repurposing the island’s topography -- and it is just a matter of time before the island loses its unique identity forever. Currently, new challenges lurk, not only in climate-erosion along the coast, but in the aggressively-changing and restless world of nature itself, and, as the island succumbs to its own disquieting natural forces, we see it gasping for its own identity in the face of diminishing grace.
A new final chapter, “Back to the Future,” features brief essays by six notable island visitors: Nantucket naturalist Peter Brace, oceanographer Dick Limeburner, seal biologist Kimberly Murray, cartographer Dana Gaines, island scalloper Carl Sjoluna and the author --  illuminating their views on predicting how the tiny island's dynamic change may be altered over the next thirty years, or by 2050, in its daily battle against nature's forces. Fresh insights and updates, added to each chapter from the original book, offer perception into new photographs, maps, charts and artwork gleaned from scientists, current research sources, local conservation and land overseers -- as well as vibrant illustrations and photographs from the author's personal and family collection, all illustrating the author's keen observations and remarks.

“It’s an unsullied, untamed and very fragile, magical land,” says Snow. “I felt compelled to record its race against time."