The Most Dangerous Book Ever Published: Deadly Deception Exposed! (Paperback) 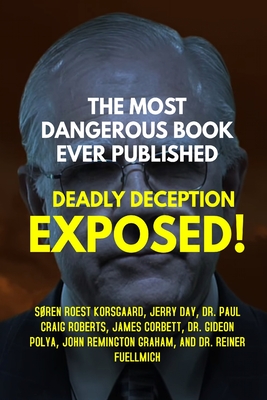 "In a time of universal deceit, telling the truth is a revolutionary act."

In seventy-eight essays, seven prominent social critics question everything from government authority to COVID-19 in what has been called, "the most dangerous book ever published." This thought-provoking and empowering, even "criminal," anthology is a major challenge to the establishment, the ruling oligarchy, or whatever we choose to call the deep state, central planners, and mega-criminals who set and control global narratives. Readers are presented with an array of "forbidden" subjects and in-depth analyses that pull the rug underneath the elite and expose the lies that constitute the matrix. Among others, this book documents and casts light on:

- Washington's deadly pursuit of hegemony camouflaged as the "War on Terror" and "spreading democracy."

- The erosion of legal principles and elimination of civil and human rights under the pretext of making us safe from terrorists and a global pandemic.

- The push to enslave humanity in a one world digital dictatorship.

- The dangers of smart meters, fluoridation, and artificial intelligence.

- The truth behind Bill Gates' purported "humanitarian" activities and plans to vaccinate the world.

- The horrors of the War on Drugs and how it is a lucrative business.

- The crimes of Winston Churchill and Apartheid Israel.

- The false reasoning behind "gun control."

- The dangers of scientism and how science is being used for social control.

- The most overrated concept in human history, i.e. government.

- The legitimacy of taxation.

- The truth of how George Floyd died.

- COVID-19 and how it has been used as a front for global enslavement, mandatory vaccination, and elimination of civil and human rights.

It is not a question of if but when this book will be censored, shadow-banned, or else how rendered invisible as have happened to numerous works of social criticism and anti-establishment content.

"I swore never to be silent whenever and wherever human beings endure suffering and humiliation. We must take sides. Neutrality helps the oppressor, never the victim. Silence encourages the tormentor, never the tormented."