The Eagle's Claw: A Novel of the Battle of Midway (CD-Audio) 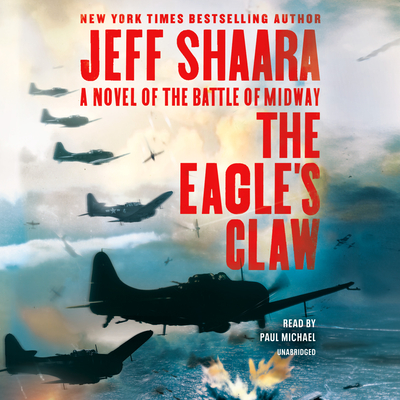 NATIONAL BESTSELLER • In a “riveting” (Booklist) tale that picks up where To Wake the Giant left off, Jeff Shaara transports us to the Battle of Midway in another masterpiece of military historical fiction.

Spring 1942. The United States is reeling from the blow the Japanese inflicted at Pearl Harbor. But the Americans are determined to turn the tide. The key comes from Commander Joe Rochefort, a little known “code breaker” who cracks the Japanese military encryption. With Rochefort’s astonishing discovery, Admiral Chester Nimitz will know precisely what the Japanese are planning.

But the battle to counter those plans must still be fought.

From the American side, the shocking conflict is seen through the eyes of Rochefort and Admiral Nimitz, as well as fighter pilot Lieutenant Percy “Perk” Baker and Marine Gunnery Sergeant Doug Ackroyd.

On the Japanese side, Admiral Isoroku Yamamoto is the mastermind. His key subordinates are Admiral Chuichi Nagumo, aging and infirm, and Admiral Tamon Yamaguchi, a firebrand who has no patience for Nagumo’s hesitation. Together, these two men must play out the chess game designed by Yamamoto, without any idea that the Americans are anticipating their every move on the sea and in the air.

Jeff Shaara recounts in electrifying detail what happens when these two sides finally meet, in what will be known ever after as one of the most definitive and heroic examples of combat ever seen. In The Eagle’s Claw, he recounts, with his trademark you-are-there immediacy and signature depth of research, one single battle that changed not only the outcome of a war but the course of our entire global history.

The story of Midway has been told many times, but never before like this.

Jeff Shaara is the New York Times bestselling author of The Fateful Lightning, The Smoke at Dawn, A Chain of Thunder, A Blaze of Glory, The Final Storm, No Less Than Victory, The Steel Wave, The Rising Tide, To the Last Man, The Glorious Cause, Rise to Rebellion, and Gone for Soldiers, as well as Gods and Generals and The Last Full Measure—two novels that complete the Civil War trilogy that began with his father’s Pulitzer Prize–winning classic, The Killer Angels. Shaara was born into a family of Italian immigrants in New Brunswick, New Jersey. He grew up in Tallahassee, Florida, and graduated from Florida State University. He lives in Gettysburg.

Paul Michael is a stage, screen, and television actor of international status. His TV credits include leading roles in a number of British sitcoms. He has acted onstage in plays ranging from Macbeth to The Wizard of Oz.

Praise for The Eagle’s Claw

“Compelling . . . Shaara deftly digs into the minds of the major players . . . Shaara writes a well-researched and evenhanded portrayal of the event that changed the direction of the Pacific War.”—Kirkus Reviews

Praise for To Wake the Giant

“A thrilling you-are-there recreation . . . Fans of military fiction will find much to enjoy.”—Publishers Weekly

“[Jeff] Shaara deftly weaves a growing intensity that explodes on the pages. . . . His descriptions and explanations of the events as they unfold eerily bring to mind the old newsreel footage. His dramatic recreation of the devastation and carnage of the attack is among some of his best work.”—Bookreporter

“Moving [and] masterful . . . To Wake the Giant is detailed and nuanced, gripping and breathless . . . Shaara tackles a well-known story and makes it his own.”—Historical Novel Society