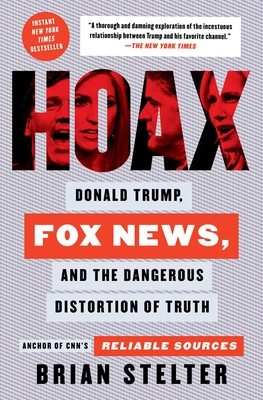 The instant New York Times bestseller that reveals the collusion between Fox News and Donald Trump—with explosive new reporting covering the election and the January 6 riot.

As the nation recovers from the Trump presidency, many questions remain: Why was the COVID-19 pandemic so grossly mishandled? How did we get so politically polarized? What caused white nationalist groups to come out of the shadows, and are they here to stay?

The answers lie the twisted story of the relationship between Donald Trump and Fox News. Through firsthand accounts from over 250 current and former Fox insiders, CNN anchor and chief media correspondent Brian Stelter unlocks the inner workings of Rupert Murdoch’s multibillion-dollar media empire. The confessions are shocking: “We don’t really believe all this stuff,” a producer says. “We just tell other people to believe it.”

Stelter completes the story of the Trump years and looks toward the future of the network that made him. Hoax is a book for anyone who reads the news and wonders how we got here, and what happens next.

Brian Stelter is the chief media correspondent for CNN Worldwide and anchor of Reliable Sources, which examines the world’s top media stories every Sunday. Prior to joining CNN in 2013, Stelter was a media reporter at The New York Times. His first book, the New York Times bestseller Top of the Morning, inspired the Apple TV+ drama The Morning Show. Stelter is a consulting producer on the series. He is also the executive producer of the HBO documentary After Truth: Disinformation and the Cost of Fake News. He lives in New York with his wife and two children and is also the author of Hoax.

"A thorough and damning exploration of the incestuous relationship between Trump and his favorite channel."
—New York Times

"A Rosetta Stone for stuff about this presidency that doesn’t otherwise make sense to normal humans"
—Rachel Maddow, author of #1 New York Times bestseller BLOWOUT and host of MSNBC's The Rachel Maddow Show

"Stelter’s critique goes beyond salacious tidbits about extramarital affairs (though there are plenty of those) to expose a collusion that threatens the pillars of our democracy."
—Washington Post

"A rare look inside the profoundly influential cable news network and...a disturbing inside portrait of how it came to enable Trump’s disastrous presidency."
—New Republic

"Stelter's account gives a sense that […] there's no one really in control — that Hannity, Carlson, Ingraham and the “Fox & Friends” morning team can essentially do what they want."
—Associated Press

"[Stelter] chronicles the symbiotic relationship between [Trump] and Rupert Murdoch’s most famous product …Hoax is amply documented."
—The Guardian

"A deep, dispiriting dive into the nefarious intersection of politics, conspiracy, lies, and money as served up by Donald Trump and Fox News."
—Kirkus (starred review)