Year Of The Hawk: America's Descent into Vietnam, 1965 (Hardcover) 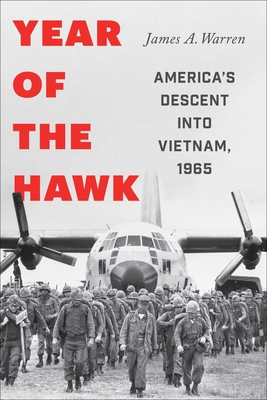 From a celebrated military historian, a powerful, “highly recommended” (Library Journal, starred review) account of the most pivotal year of the Vietnam War—the cataclysm that “continues to haunt American politics and culture” (Publishers Weekly).

The Vietnam War was the greatest disaster in the history of American foreign policy. The conflict shook the nation to its foundations, exacerbating already deep cleavages in American society, and left the country baffled and ambivalent about its role in the world. Year of the Hawk is a military and political history of the war in Vietnam during 1965—the pivotal first year of the American conflict, when the United States decided to intervene directly with combat units in a struggle between communist and pro-Western forces in South Vietnam that had raged on and off for twenty years.

By December 1965, a powerful communist offensive had been turned back, and the US Army had prevailed in one of the most dramatic battles in American military history, but nonetheless there were many signs and portents that US involvement would soon slide toward the tipping point of tragedy. Vividly interweaving events in the US capital with action in Southeast Asia, historian James A. Warren explores the mindsets and strategies of the adversaries and concludes that, in the end, Washington was not so much outfought in Vietnam as outthought by revolutionaries pursuing a brilliant, protracted war strategy. Based on new research, Year of the Hawk offers fresh insight into how a nationalist movement led by communists in a small country defeated the most powerful nation on earth and is “a well-researched overview of how America got into Vietnam—and why it shouldn’t have” (Kirkus Reviews).

James A. Warren is a historian and foreign policy analyst. A regular contributor to The Daily Beast, he is the author of God, War, and Providence: The Epic Struggle of Roger Williams and the Narragansett Indians against the Puritans of New England; American Spartans: The US Marines: A Combat History from Iwo Jima to Iraq; and The Lions of Iwo Jima: The Story of Combat Team 28 and the Bloodiest Battle in Marine Corps History (with Major General Fred Haynes, USMC-RET), among other books. For many years, Warren was an acquisitions editor at Columbia University Press, and more recently a visiting scholar in American Studies at Brown University. He lives in Saunderstown, Rhode Island.

"For those old enough to remember the war, much of the book will offer painful, pointed reminders of what went wrong at a key point in American history. As a focused study of a pivotal year, this book is a welcome addition to the literature on a misguided war. . . . A well-researched overview of how America got into Vietnam—and why it shouldn’t have." —Kirkus Reviews

“A worthy introduction to a conflict that continues to haunt American politics and culture.” —Publishers Weekly

"Highly recommended as a concise study of the United States’ entrance into the Vietnam War. . . . an excellent primer on how countries can charge down the wrong warpath." —Library Journal (starred review)

Advance Praise for Year of the Hawk:

“In 1965, the war in Vietnam became America's war. In this gripping and comprehensive narrative, ranging from deliberations among top U.S. officials to bloody jungle firefights, James A. Warren expands our understanding of how and why the United States went so badly and needlessly astray.” —Andrew J. Bacevich, author of American Apocalypse: America’s Role in a World Transformed

“Year of the Hawk is a masterful addition to the field of Vietnam War studies. The causes and consequences of the dramatic escalation of U.S. ground and aerial combat in 1965 reveal the essence of the long conflict. Warren’s narrative is a gripping blend of sweeping strategic analysis and granular detail of the wars on the ground, in the air, and in the corridors and avenues of Washington and Hanoi. Highly recommended for readers just beginning a deep dive into the American war in Vietnam, Warren’s book also will reward those well versed in its history who wish to learn more.” —David L. Anderson, author of The Columbia Guide to the Vietnam War and Vietnamization: Politics, Strategy, Legacy, and editor of The Columbia History of the Vietnam War

More Praise for James A. Warren

“Warren transforms what could have been merely a Pilgrim version of cowboys and Indians into a sharp study of cultural contrast. . . . a well-researched cameo of early America.” —Roger Lowenstein, The Wall Street Journal, on God, War, and Providence

“The Lions of Iwo Jima captures in stark detail the incredible trial by fire of Combat Team 28 in the Marine Corps’ most challenging battle of the Pacific War. It shows what Americans can do when the chips are really down.” —Dan Rather

“The Lions of Iwo Jima tells the full story of the unit that raised the flags on Mount Suribachi in powerful, brooding detail. Certainly one of the best books ever written about Iwo Jima—and about the experience of war at ground level.” —Clint Eastwood, director of Flags of Our Fathers and Letters from Iwo Jima

“A welcome, readable, and concise history of the corps’ past 60 years.” —The Washington Post on American Spartans