Growing Up Getty: The Story of America's Most Unconventional Dynasty (Paperback) 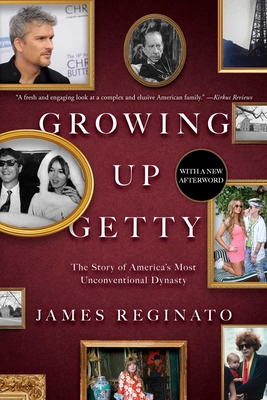 An enthralling and comprehensive look into the contemporary state of one of the wealthiest—and most misunderstood—family dynasties in the world, perfect for fans of Succession and House of Gucci.

The Gettys are one of the wealthiest—and most misunderstood—family dynasties. Oil magnate J. Paul Getty, once the richest man in the world, is the patriarch of an extraordinary cast of sons, grandchildren, and great-grandchildren. While some have been brought low by mental illness, drug addiction, and one of the most sensational kidnapping cases of the 20th century, many of Getty’s heirs have achieved great success. In addition to Mark Getty, a cofounder of Getty Images, and Anne G. Earhart, an award-winning environmentalist, others have made significant marks in a variety of fields, from music and viniculture to politics and LGBTQ rights.

Now, across four continents, a new generation of lively, unique, and even outrageous Gettys is emerging—and not coasting on the dynasty’s still-immense wealth. August Getty designs extravagant gowns worn by Katy Perry, Cher, and other stars; his sibling, Nats—a fellow LGBTQ rights activist who announced his gender transition following his wedding to transgender icon Gigi Gorgeous—produces a line of exclusive streetwear. Their fascinating cousins include Balthazar, a multi-hyphenate actor-director-DJ-designer; and Isabel, a singer-songwriter and MBA candidate. A far-flung yet surprisingly close-knit group, the ascendant Gettys are bringing this iconic family onto the global stage in the 21st century.

Through extensive research, including access to J. Paul Getty’s diaries and love letters, and fresh interviews with family members and friends, Growing Up Getty offers an enthralling and revealing look into the benefits and burdens of being part of today’s world of the ultra-wealthy.

James Reginato, a writer-at-large for Vanity Fair and a contributor to Sotheby’s magazine, was formerly the features director for W magazine. He is the author of Great Houses, Modern Aristocrats, and The Carlyle. A graduate of Columbia University, he lives in New York City.

“A brisk and sympathetic chronicle of the man [J. Paul Getty] and his many descendants. Add this to Anderson Cooper and Katherine Howe’s Vanderbilt and Tina Brown’s The Palace Papers, and we may have a new pandemic escape genre on our hands: the scionography.
—New York Times Book Review

“Reginato’s meticulously researched and beautifully written account takes the reader deep into the lives of the charismatic and elusive clan that comprises the `House of Getty,’ piercing the myths that have surrounded some of its protagonists for decades and introducing us to others for the first time.”
—Sara Gay Forden, New York Times bestselling author of The House of Gucci

“What a wonderful journey into the lives of one of America’s most fascinating dynasties. A must-read.”
—Laurence Leamer, New York Times bestselling author of Capote’s Women

“A fascinating, and sometimes revisionist, take on the quasi-mythic figure of J. Paul Getty – and an impeccably researched tracing of the lives of his descendants: the people who grappled, in astonishingly diverse ways, with the strange fate of belonging to a modern dynasty.”
—Laura Thompson, New York Times bestselling author of The Six and Heiresses

“A first-rate look at one of the world's greatest and most misunderstood dynasties. Engrossing, illuminating ... exhaustively researched, and elegantly written. Taking us reassuringly by the hand, James Reginato leads us on an absorbing stroll through the funhouse hall of mirrors that is the Family Getty.”
—Christopher Andersen, #1 New York Times bestselling author of Brothers and Wives

"The Gettys’ eccentricities are on full display, delightfully so."
—San Francisco Chronicle

“Reginato’s meticulous research and personal interviews create a sweeping portrait of arguably the United States’ greatest industrial dynasty and extracts the untold stories behind the sensational headlines . . . Reginato argues that Getty spawned not just a dynasty but a betterment of society, as the current generation of Gettys are aligned with the times . . . This narrative captures a sensitive and influential family who, at its heart, values togetherness . . . verdict: A rapturous biography for casual readers. “
—Library Journal, starred review

“. . . [an] entertaining chronicle of the illustrious dynasty’s four generations . . . engaging in its cinematic depictions of the family in their element: the Getty patriarch surrounded by priceless antiques in luxurious Sutton Place, Paul Jr. and Talitha Getty smoking up with a carnival of 1960s cultural icons in the Palais de la Zahia, Billy and Vanessa Getty’s glittering Napa Valley wedding. The result offers the approximate pleasure of thumbing through a century of society pages.”
—Publishers Weekly

“In a captivating narrative, Reginato, writer at large for Vanity Fair and a contributor to Sotheby’s magazine, brings readers up to date on the state of the Getty family . . . A fresh and engaging look at a complex and elusive American family.”
—Kirkus