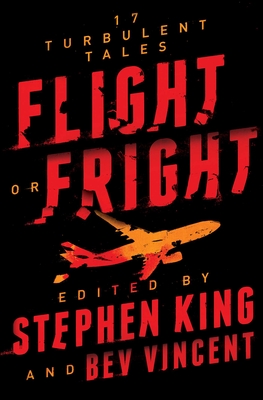 #1 New York Times bestselling author and master of horror Stephen King teams up with Bev Vincent of Cemetery Dance to present a terrifying collection of sixteen short stories (and one poem) that tap into one of King’s greatest fears—air travel—featuring brand-new stories by King and Joe Hill, “an expertly compiled collection of tales that entertain and scare” (Booklist).

Stephen King hates to fly, and he and co-editor Bev Vincent would like to share their fear of flying with you.

Welcome to Flight or Fright, an anthology about all the things that can go horribly wrong when you’re suspended six miles in the air, hurtling through space at more than 500 mph, and sealed up in a metal tube (like—gulp!—a coffin) with hundreds of strangers. Here are all the ways your trip into the friendly skies can turn into a nightmare, including some we’ll bet you’ve never thought of before... but now you will the next time you walk down the jetway and place your fate in the hands of a total stranger.

Featuring brand-new “standouts” (Publishers Weekly) by Joe Hill and Stephen King, as well as fourteen classic tales and one poem from the likes of Richard Matheson, Ray Bradbury, Roald Dahl, Dan Simmons, Sir Arthur Conan Doyle, and many others, Flight or Fright is, as King says, “ideal airplane reading, especially on stormy descents…Even if you are safe on the ground, you might want to buckle up nice and tight.”

Each story is introduced by Stephen King and all will have you thinking twice about how you want to reach your final destination.

Stephen King is the author of more than sixty books, all of them worldwide bestsellers. His recent work includes Fairy Tale, Billy Summers, If It Bleeds, The Institute, Elevation, The Outsider, Sleeping Beauties (cowritten with his son Owen King), and the Bill Hodges trilogy: End of Watch, Finders Keepers, and Mr. Mercedes (an Edgar Award winner for Best Novel and a television series streaming on Peacock). His novel 11/22/63 was named a top ten book of 2011 by The New York Times Book Review and won the Los Angeles Times Book Prize for Mystery/Thriller. His epic works The Dark Tower, It, Pet Sematary, and Doctor Sleep are the basis for major motion pictures, with It now the highest-grossing horror film of all time. He is the recipient of the 2020 Audio Publishers Association Lifetime Achievement Award, the 2018 PEN America Literary Service Award, the 2014 National Medal of Arts, and the 2003 National Book Foundation Medal for Distinguished Contribution to American Letters. He lives in Bangor, Maine, with his wife, novelist Tabitha King.

“This entertaining anthology of horror, mystery, and literary tales about aircraft (most reprinted) will have the reader thinking twice about flying… Standouts include the two original stories: King’s ‘The Turbulence Expert,’ a perfectly tense tale about a mysterious group that prevents aircraft crashes though unusual means, and Joe Hill’s ‘You Are Released,’ made terrifying by its proximity to reality: it follows the crew and passengers on a 777 en route to Boston, who learn that North Korea has just nuked Guam and other countries are retaliating. This is a strong anthology full of satisfying tales.”
—Publishers Weekly

“An expertly compiled collection of tales that entertain and scare. New stories by Stephen King and Joe Hill, the almost universal fear of flying trope, classic stories….this book really does sell itself. And sells it very well as the first printing is already sold out and it hasn’t shipped yet…this is a great intro to horror collection. The mixture of classic authors with new masters and a common trope that is scary but not necessarily gory or based on a supernatural monster, will lure in readers, many of whom might not consider themselves horror readers.”
—Booklist