Truth Be Told: My Journey Through Life and the Law (Hardcover) 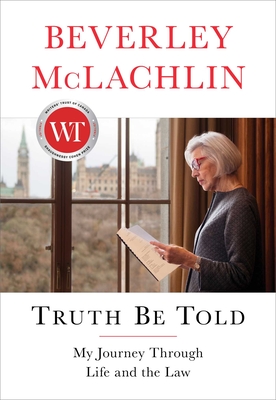 By Beverley McLachlin
$29.99
Email or call for price.

​Former Chief Justice of the Supreme Court of Canada Beverley McLachlin offers an intimate and revealing look at her life, from her childhood in the Alberta foothills to her career on the Supreme Court, where she helped to shape the social and moral fabric of the country.

As a young girl, Beverley McLachlin’s world was often full of wonder—at the expansive prairie vistas around her, at the stories she discovered in the books at her local library, and at the diverse people who passed through her parents’ door. While her family was poor, their lives were rich in the ways that mattered most. Even at a young age, she had an innate sense of justice, which was reinforced by the lessons her parents taught her: Everyone deserves dignity. All people are equal. Those who work hard reap the rewards. Willful, spirited, and unusually intelligent, she discovered in Pincher Creek an extraordinary tapestry of people and perspectives that informed her worldview going forward.

Still, life in the rural Prairies was lonely, and gaining access to education—especially for girls—wasn’t always easy. As a young woman, McLachlin moved to Edmonton to pursue a degree in philosophy. There, she discovered her passion lay not in academia, but in the real world, solving problems directly related to the lives of the people around her. And in the law, she found the tools to do exactly that.

She soon realized, though, that the world was not always willing to accept her. In her early years as an articling student and lawyer, she encountered sexism, exclusion, and old boys’ clubs at every turn. And outside the courtroom, personal loss and tragedies struck close to home. Nonetheless, McLachlin was determined to prove her worth, and her love of the law and the pursuit of justice pulled her through the darkest moments.

McLachlin’s meteoric rise through the courts soon found her serving on the highest court in the country, becoming the first woman to be named Chief Justice of the Supreme Court of Canada. She rapidly distinguished herself as a judge of renown, one who was never afraid to take on morally complex or charged debates. Over the next eighteen years, McLachlin presided over the most prominent cases in the country—involving Charter challenges, same-sex marriage, and euthanasia. One judgment at a time, she laid down a legal legacy that proved that fairness and justice were not luxuries of the powerful but rather obligations owed to each and every one of us.

With warmth, honesty, and deep wisdom, McLachlin invites us into her legal and personal life—into the hopes and doubts, the triumphs and losses on and off the bench. Through it all, her constant faith in justice remained her true north. In an age of division and uncertainty, McLachlin’s memoir is a reminder that justice and the rule of law remain our best hope for a progressive and bright future.

Beverley McLachlin is the #1 bestselling author of two novels, Full Disclosure and Denial, and a memoir, Truth Be Told, which won the prestigious Writers’ Trust Shaughnessy Cohen Prize and the Ottawa Book Award for Nonfiction. From 2000 to 2017, McLachlin was Chief Justice of the Supreme Court of Canada. She is the first woman to hold that position and the longest-serving Chief Justice in Canadian history. In 2018, McLachlin became a Companion of the Order of Canada, the highest honour within the Order. Visit her at BeverleyMcLachlin.com.

“She offers a powerful window into how her life and the law intertwine. . . . It is this orientation—McLachlin seeing the law in human terms and showing her own humanity in her law-making, rejecting legal ideology in favour of the specifics of the case in front of her—that may best define her legacy.”
— The Walrus

“Her legacy . . . is now part of the country’s foundations.”
— The Globe and Mail

“We know Beverley McLachlin as a pioneer—the first woman to serve as Canada’s Chief Justice. But now we’ll know her for something else entirely: gripping crime fiction. . . . Full Disclosure is a well-crafted page-turner in the vein of international bestsellers like Sarah Vaughan’s Anatomy of a Scandal, and is packed with courtroom drama, intrigue, plot twists, and fascinating details about our criminal justice system. Written in an accessible voice, with a fast-moving narrative, this is beach, cabin, and airplane reading at its best.”
— Vancouver Sun

“Gripping, intricate, and full of heart, Full Disclosure is a bold debut by the former Chief Justice of the Supreme Court of Canada. Novelist Beverley McLachlin is a force to be reckoned with.”
— KATHY REICHS, bestselling author of the Bones series

“For page-turning legal thrillers, it’s hard to do better than this one, and not just because it’s by the ultimate insider: the recently retired Chief Justice of the Supreme Court of Canada.”
— Maclean’s

“Totally compelling: McLachlin brings her wit and intelligence—and unrivalled experience—to this courtroom drama, which brilliantly illuminates the games lawyers play and the risks of wrong choices. The main character, Jilly Truitt, is a woman I want to meet again.”
— CHARLOTTE GRAY, bestselling author of The Promise of Canada

“McLachlin puts her experience on the Court to good use, writing a taut legal thriller with great twists and turns that will keep readers guessing to the very end.”
— CATHERINE McKENZIE, bestselling author of Six Weeks to Live

“What we have here is the inquiring mind of the lawyer and jurist, now bold new writer. . . . Beverley McLachlin has created something real and visceral. Hats off, former Chief Justice of the Supreme Court of Canada, and all rise for what we hope will be the encore.”
— Canadian Lawyer Magazine