The Colored Waiting Room: Empowering the Original and the New Civil Rights Movements; Conversations Between an Mlk Jr. Confidant and a Modern-Da (Paperback) 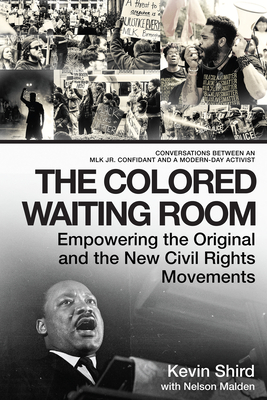 Extraordinary conversations between a confidant of Martin Luther King Jr. and a modern-day activist lead to the game-changing realizations that a second-wave civil rights movement is unfolding and that we must embrace the lessons of the past to effect lasting change.

In 1966, Nelson Malden ran for public office in Montgomery, Alabama. He was the first African American to do so. Campaigning for him was his friend Martin Luther King Jr., who had organized protests and had written the speeches that would help criminalize racial segregation and discrimination from his seat in the Malden Brothers Barbershop.

In The Colored Waiting Room, modern-day activist Kevin Shird heads from his hometown of Baltimore, Maryland to Montgomery to meet eighty-four-year-old Nelson Malden and contextualize the significance of the killings of Tamir Rice, Freddie Gray, and Trayvon Martin as well as the demonstrations in Charlottesville, Ferguson, Baltimore, and around the country. The result is a groundbreaking understanding of today's burgeoning second-wave civil rights movement and the urgent actions necessary for racial equality and change.

Here, Shird raises the profound question of whether blacks are still in a colored waiting room, biding their time and waiting for racial equality to be the norm. He also shares compelling personal realizations on the lost connection between African American youth and their ancestors' fight against slavery and Jim Crow laws, asking throughout this pivotal volume, how far can we go without knowing where we've come from?

Kevin Shird is an activist, national youth advocate, public speaker, and author. Shird began dealing drugs at the age of sixteen, and later served almost twelve years in prison for drug trafficking. Today he works with young people to help them avoid the dangers of street culture and advocates for policy changes that support their safety and development. With his friend, award-winning R&B singer Mario (Mario Barrett), Shird cofounded the Do Right Foundation, a nonprofit that from 2008-2014 provided a lifeline to children living with family members abusing drugs. During the tenure of President Barack Obama, Shird worked with the White House Office on National Drug Control Policy and as part of the committee for President Obama's Clemency Project. During the protests in Baltimore following the death of Freddie Gray, Shird was an action consultant to then-Baltimore Mayor Stephanie Rawlings-Blake's administration. Today, Shird speaks at colleges and universities nationwide on public health policy, reentry into society after incarceration, and substance abuse prevention. He lives in Baltimore, MD.Nelson Malden owned and worked for a half-century at the Malden Brothers Barbershop. Martin Luther King Jr. was a client of his and the reverend at his church, and the two were friends until King's assassination. During the civil rights movement, Malden distributed the Southern Courier newspaper, one of the few newspapers in the South to cover the African American community, and participated in the Montgomery Bus Boycott. Later, Malden was the first African American to run for political office in the racially divided city of Montgomery, AL. He lives in Montgomery, AL.