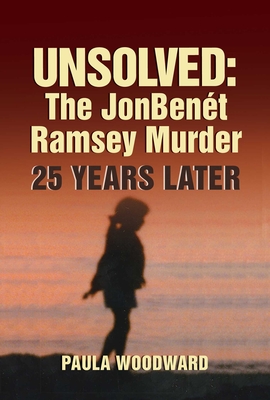 After the murder of JonBenét Ramsey, rumors and misinformation planted by Boulder, Colorado law enforcement sped rapidly around the world. Suspicion immediately fell on the family as police sought to exploit her death in the media. Prosecutors and law enforcement intentionally manipulated existing evidence and ignored inconvenient evidence. Child beauty pageant photos of JonBenét whipped the case into a judgmental frenzy. Paula Woodward was one of the few journalists who reported the family’s side of the story. She’s still investigating the 25-year conspiracy to convict John and Patsy Ramsey by law enforcement who acted with arrogance, insecurity, incompetence, and benign neglect.

In Unsolved, the follow-up to Woodward’s award-winning and acclaimed true crime exposé We Have Your Daughter, Woodward explores outstanding questions still swirling around the cold case: Who wrote the baffling ransom note? What was found in the 11 pages of exclusive police report summaries backgrounding the Ramseys? And why has the case languished for years?

Included in the book are new, exclusive interviews with John Ramsey, his wife Jan, and his son John Andrew as they look back at the case, 25 years later, and react with stunning candor. New photos and reports from JonBenét’s teachers, friends, and family cut through the sensationalized headlines to show who JonBenét really was. Interwoven throughout the book is expert commentary on what the actual evidence shows, and whether the killer might ever be caught.

With never-before-released evidence from a now-passive investigation, Unsolved presents the known facts of the killing of JonBenét Ramsey, the bizarre yet intriguing aspects of this ongoing mystery, and gives you rare insight into whether a family member or an intruder savagely murdered JonBenét.

Paula Woodward is an author and Emmy-award winning investigative journalist in Denver, Colorado. For 32 years, she was the chief investigative reporter for the number one news station, KUSA-TV, NBC in Denver, where she landed exclusive interviews and exposed public corruption and wrongdoing with hidden cameras and powerful investigations. Her stories prompted legislators to create new laws. Woodward has been recognized with more than fifty accolades for reporting, including the Edward R. Murrow and the Society of Professional Journalism awards, and multiple Emmy awards. She reported for the Rocky Mountain News and The Denver Post as part of a business partnership with KUSA-TV. She has spent 25 years reporting and investigating the JonBenet Ramsey murder, and since retiring from broadcast journalism in 2009, she has written two books on the unsolved case. She is currently planning another book on the fifty missions her father flew in a B-24 bomber in World War II, while continuing to focus on the JonBenet Ramsey case.