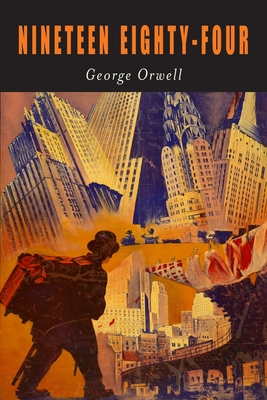 2021 Facsimile of the 1949 Edition. Nineteen Eighty-Four: A Novel, often published as 1984, is Orwell's famed dystopian novel originally published in 1949 by Secker & Warburg as Orwell's ninth and final book completed in his lifetime. Thematically, Nineteen Eighty-Four is concerned with the consequences of totalitarianism, mass surveillance, and repressive regimentation of all persons and behaviors within society. Orwell, himself a democratic socialist, modeled the authoritarian government in the novel after Stalinist Russia. More broadly, the novel examines the role of truth and facts within politics and the ways in which they are manipulated.

Nineteen Eighty-Four has become a classic literary example of political and dystopian fiction. It also popularized the term "Orwellian" as an adjective, with many terms used in the novel entering common usage, including "Big Brother", "doublethink", "thoughtcrime", "Newspeak", "memory hole", "2 + 2 = 5", "proles", "Two Minutes Hate", "telescreen", and "Room 101". Time included it on its 100 best English-language novels from 1923 to 2005. It was placed on the Modern Library's 100 Best Novels, reaching No. 13 on the editors' list and No. 6 on the readers' list. In 2003, the novel was listed at No. 8 on The Big Read survey by the BBC. Parallels have been drawn between the novel's subject matter and real life instances of totalitarianism, mass surveillance, and violations of freedom of expression among other themes.

"Nineteen Eighty-Four is a remarkable book; as a virtuoso literary performance it has a sustained brilliance that has rarely been matched in other works of its genre...It is as timely as the label on a poison bottle." -New York Herald Tribune

"A profound, terrifying, and wholly fascinating book...Orwell's theory of power is developed brilliantly." -The New Yorker

"A book that goes through the reader like an east wind, cracking the skin...Such are the originality, the suspense, the speed of writing, and withering indignation that it is impossible to put the book down." -V. S. Pritchett

"Orwell's novel escorts us so quietly, so directly, and so dramatically from our own day to the fate which may be ours in the future, that the experience is a blood-chilling one." -Saturday Review