Barn Burning Barn Building: Tales of a Political Life, from LBJ to George W. Bush and Beyond (Hardcover) 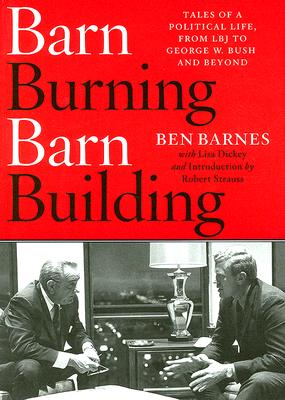 How did the Democratic Party-of JFK, LBJ, and civil rights-fall from glory? How did Texas, home of its most promising players, become Bush territory? What do politicians on either side need to do today to get our country back on track? Ben Barnes has the answers. His political savvy and bravado made him a standout in the rough-and-tumble world of Texas politics. He won a seat in the Texas Legislature in 1960, and four years later he became the youngest speaker of the House since the Civil War. In 1968, he helped Congressman George Herbert Walker Bush get his son into the National Guard-a controversy that would rage during the 2004 presidential election. In 1970, Lyndon Johnson told the public that Ben was destined to be the next U.S. president to hail from Texas. Barnes's rollicking memoir recalls the glory days of his Texas past and blazes a trail for our country's future.

Ben Barnes is a consultant and former lieutenant governor of Texas. He was a vice-chair and top fundraiser of the John Kerry campaign in the 2004 presidential elections. He has served as speaker of the House in Texas from 1965 to 1969, U.S. representative to the NATO Conference in 1967, and United Nations Representative to Geneva, Switzerland in 1968.