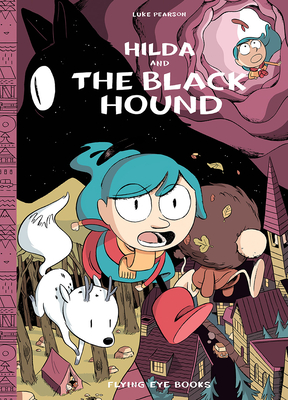 This is book number 4 in the Hildafolk series.

Hilda sits in her tent, dwarfed by volumes of the Greater Fjords Wildlife Chronicles with a flashlight and her restless companion Twig, but Hilda's not in the fjords and it isn't raining. Hilda's pitched a tent in her room and it's been days since she's been out.

In Hilda's new adventure, she meets the Nisse: a mischievous but charismatic bunch of misfits who occupy a world beside—but also somehow within—our own, and where the rules of physics don't quite match up. Meanwhile, on the streets of Trolberg, a dark specter looms...

Named one of The Beat's 100 Best Comics of the Decade

"Though definitely an underachiever when it comes to merit badges, Hilda’s broad curiosity and willingness to stand up for the undergnome will make her a winner in most readers’ eyes."
—Kirkus Reviews

"Pearson has mastered both the gentler aspects of creating a compelling children’s character along with the art of conjuring an exciting, kinetic comic book adventure. The fourth book in the Hilda series is the best, as the character is now established enough on the page to allow for a greater exploration of her environment. The design, the use of color and especially Pearson’s line are all impeccably beautiful without being slick."
—The Comics Journal

"[Hilda's world] is. . . a glorious, exciting if also rather menacing place—one children will be eager to enter. It's also visually arresting: exuberant and lively and faintly Miyazakian."
—The New York Times

"Hilda is the little girl. And this is her folk tale. And pretty much everything you need to know about how good this is is there on that absolutely gorgeously delightful cover. By the end of it, you’ll have exactly the same smile as Hilda has."
—Forbidden Planet

"For adults ... Pearson’s measured storytelling ... and detailed, imaginative artwork make Hilda and the Bird Parade an absolute treat to dive into. It’s hard to imagine a better all-ages comic will be published this year."
—Slate

"With the Hildafolk series, Luke Pearson has carved himself a unique niche in the UK comics scene: a successful all-ages graphic novel series and it is much deserved. It is clearly the vision of one man and Hilda and the Black Hound is another thrilling and alluring instalment to Pearson’s signature series."
—Broken Frontier

"The Hilda books follow the exploits of a smart, blue-haired girl who lives in a village called Trolberg with her mom and her antlered pup named Twig. Pearson expertly mixes fantasy elements with familiar everyday stuff—for instance, in this volume, Hilda joins the scouts and has trouble completing the tasks she needs to do in order to earn her badges."
—Mental Floss

"Hilda and the Black Hound is filled with magic, in all senses of that word."
—Comics Bulletin

"This is perfection in sixty-four pages. Hilda is brave, resourceful, compassionate, capable of epically screwing up, and always does things with the very best of intentions; in other words, totally human. Charmingly and enticingly illustrated, the icing on the cake is the fact that Pearson never dumbs things down for his audience. The resulting dry wit found in both text and illustrations is as appealing to adults as it is to kids."
—Foreword Reviews

"Hilda is a curious, intelligent, and adventure-seeking protagonist. Fans will delight in her adventures, and Pearson’s lush art is gorgeous without being crowded."
—School Library Journal

"The Black Hound takes the strongest elements of the art styles from all of the previous Hilda books and combines them into one really wonderful volume of art. […] the adventure here is entertaining and moving."
—Comics Alliance