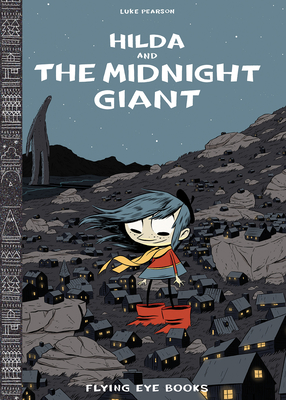 This is book number 2 in the Hildafolk series.

Hilda finds her world turned upside down as she faces the prospect of having to leave her snow-capped birthplace for the hum of the megalopolis. But why do the "Hidden Elves" want her to leave? Why is it that only she can see them? And who is the giant that turns up in the night?

"[Hilda’s world] is… a glorious, exciting if also rather menacing place — one children will be eager to enter. It’s also visually arresting: exuberant and lively and faintly Miyazakian"
—The New York Times Book Review

"Pearson’s whimsical artwork—a cross between Lucky Luke and Miyazaki—creates a magical spell of a mysterious world of hidden creatures, and the production of the book make it a treasure in itself. The story—comparable to the Adventures of Polo series by Regis Faller and Copper by Kazu Kibuishi—never flags in imagination or wonder"
—Publisher’s Weekly, Starred Review

"Midnight Giant is sad, but packs probably the most weighty punch of the series as far as real-life lessons for kids. […] It’s less a moral about transitioning from childhood to adulthood than it is about a transition from the naiveté of early childhood (Santa Claus, anyone?) into the more realistic stages of later childhood. It’s also about what matters most — possessions or people?"
—Comics Alliance

"Hilda is the little girl. And this is her folk tale. And pretty much everything you need to know about how good this is is there on that absolutely gorgeously delightful cover. By the end of it, you’ll have exactly the same smile as Hilda has."
—Forbidden Planet