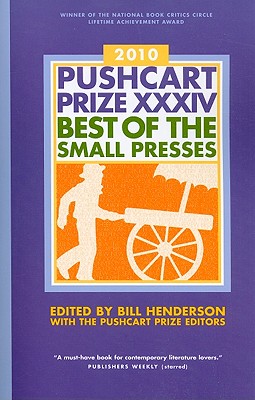 By Bill Henderson (Editor), The Pushcart Prize Editors (With)
$18.95
Email or call for price.

This is book number 34 in the The Pushcart Prize Anthologies series.

The most honored literary series in America marks its 34th year of continuous publication.

Reviewing the 2008 edition of The Pushcart Prize, Publishers Weekly called it “a must-have for contemporary literature lovers” (starred review). The Chicago Tribune has raved, “When it comes to contemporary American literature, the small press is where the action is . . . of all anthologies, Pushcart’s is the most rewarding to read straight through.” In The Pushcart Prize XXXIV more than sixty selections of short stories, essays, and poetry have been picked from thousands of nominations by Pushcart Press staff, contributing editors, and hundreds of small presses. This year Rosanna Warren and Wesley McNair serve as poetry editors. The result is an introduction to a literary world that few readers have access to, where much of today’s important new writing is published, far from the commercial influence of the conglomerates. The Pushcart Prize has been chosen for the Ivan Sandrof Lifetime Achievement recognition by the National Book Critics Circle and for numerous other awards.