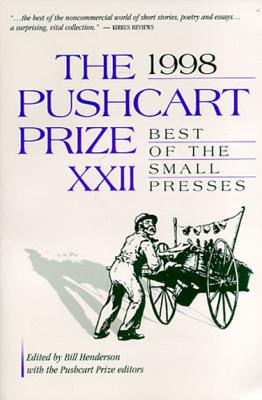 This is book number 22 in the The Pushcart Prize Anthologies series.

Pushcart Prize XXII continues as a testament to the flourishing of American literature in our small presses.

Edited with the assistance of over 200 distinguished contributing editors--including Andre Dubus, Joyce Carol Oates, Rosellen Brown, Rick Bass, Carolyn Kizer, Edward Hoagland, Rita Dove, Naomi Shihab Nye, Sandra Tsing Loh, and Sharon Olds--this volume celebrates over 60 stories, essays, and poems from dozens of little magazines and small presses. It seems that the more commercial publishers consolidate into a few companies, the more small presses capture and encourage what is truly lasting and important in our literary culture. Each edition of The Pushcart Prize has increased from strength to strength as the small presses expand in influence and energy. The reviews and features for last year's edition confirmed this strength. "A generous and stimulatingly eclectic selection of fiction, poetry and essays--the biggest anthology in the 21-year history of the Pushcart Press," said Publishers Weekly in a starred review. "The largest and most adventurous volume so far," commented Booklist. "The Pushcart Prize has become a literary institution . . . perhaps the single best measure of the state of affairs in American literature today," noted the New York Times. Books in this series have been named "a Notable Book of the year" several times by the New York Times Book Review; winner of the Publishers Weekly Carey-Thomas Award.