Development Arrested: The Blues and Plantation Power in the Mississippi Delta (Paperback) 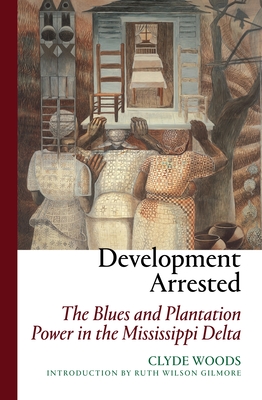 Development Arrested is a major reinterpretation of the 200-year-old conflict between African American workers and the planters of the Mississippi Delta. The book measures the impact of the plantation system on those who suffered its depredations firsthand, while tracing the decline and resurrection of plantation ideology in national public policy debate. Despite countless defeats under the planter regime, African Americans in the Delta continued to push forward their agenda for social and economic justice.

Throughout this remarkably interdisciplinary book, ranging across fields as diverse as rural studies, musicology, development studies, and anthropology, Woods demonstrates the role of music—including jazz, rock and roll, soul, rap and, above all, the blues—in sustaining a radical vision of social change.

Clyde Woods (1957–2011) was an Associate Professor of Black Studies and Acting Director of the Center for Black Studies Research at the University of California, Santa Barbara. His other books include Development Drowned and Reborn: The Blues and Bourbon Restorations in Post-Katrina New Orleans.

“A stunning and fresh analysis of the political economy of white supremacy and the redemptive power of the blues. All Americans, especially students, scholars, general readers and policy makers, who care about the extension of democracy and the future of black freedom, should read and discuss Clyde Wood’s intriguing book.”
—Darlene Clark Hine, coauthor of The African-American Odyssey

“Development Arrested has no peer, for Clyde Woods is a rare scholar who takes the blues seriously as theory and social critique. Arguing that this folk discourse emerged in response to economic and political restructuring in the Delta during the twentieth century, he goes on to show how it constitutes a critique of the plantation South, New South modernization, and the transformation of capitalist agriculture during the so-called Green Revolution. To paraphrase something Marx said a long time ago, Development Arrested reveals the connection between the arm of criticism (i.e. the blues/social science) and the criticism of arms: struggle for power in the Delta.”
—Robin D.G. Kelley, author of Thelonious Monk: The Life and Times of an American Original

“Woods should be applauded for pointing out the absurdity of a situation in which, for instance, whole families—made obsolete my machinery, genetic research, and high yield fertilizers—are allowed to starve within eyeshot of fields that government pay affluent farmers to leave fallow.”
—Oxford American