Up from Slavery: An Autobiography (Complete and unabridged.) (Hardcover) 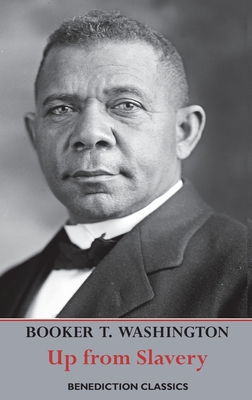 By Booker T. Washington
$17.70
Ships from our supplier - you choose to your home or to the store

Booker T. Washington (April 18, 1856 - November 14, 1915) was an African American educator, leader, author and orator and was an adviser to several US presidents. He was born into slavery on a plantation in Virginia, remembering

"I cannot recall a single instance during my childhood or early boyhood when our entire family sat down to the table together. On the plantation in Virginia, and even later, meals were gotten to the children very much as dumb animals get theirs... a piece of bread here and a scrap of meat there."

He was nine when his family gained their emancipation and he describes the rejoicing and the apprehension as freed slaves entered a new life. His mother took the family to the free state of West Virginia. The only name he had known was "Booker," but at school, when first asked his name by the teacher, he coolly added "Washington" to be like the other children who had at least two names. This established him on a path of fitting into the white world.

In the course of his life he established the Tuskegee Institute, now Tuskegee University, helped found the National Negro Business League, now eclipsed by the NAACP, and advised several US presidents. Between 1890 and 1915, Washington was the dominant leader in the African American community and of the contemporary Black elite. He established a powerful political and financial network to advance the cause of African Americans through education and business known as the Tuskegee Machine.

Up from Slavery chronicles Washington's life from slave to schoolmaster to statesman. It was a best seller when published and for many years thereafter. In it he writes

"The temptations to enter political life were so alluring that I came very near yielding to them at one time, but I was kept from doing so by the feeling that I would be helping in a more substantial way ... through a generous education of the hand, head, and heart."

Up from Slavery along with Narrative of the Life of Frederick Douglass and du Bois's Souls of Black Folk are essential early African-American classics. This edition, set in an easy to read 11 point font, is complete and unabridged.