History of the Second World War: The War Against Japan 1941-1945 ATLAS (Hardcover) 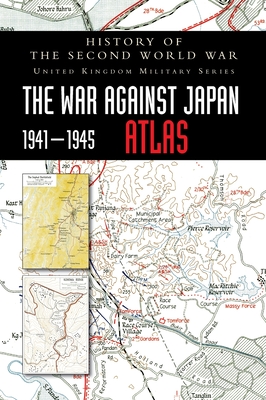 A full assembly of all 223 maps and sketches from UNITED KINGDOM MILITARY SERIES: OFFICIAL CAMPAIGN HISTORY - THE WAR AGAINST JAPAN.

These official maps will help unravel the complexities of a difficult war that saw the Allies pitted against Japan. The British Empire waged ceaseless war against Japan between December 1941 and August 1945, in defeat and retreat at first, stabilising in 1943 as the Allies hit back and the Japanese tide abated, and turning to the offensive in 1944.

The Empire's war against Japan witnessed constant military activity and the deployment east of Suez of hundreds of thousands of imperial service personnel on land, sea and air, from Australasia, Britain, East and West Africa, and from a rebuilt and vastly expanded Indian Army. British Imperial military activity continued, following the surrender at Singapore, in Borneo, the Dutch East Indies, Ceylon, and in places such as New Guinea and British Pacific islands, occupied Malaya, Thailand, and beyond. British Imperial forces were also constantly active at sea and in the air, even when the Empire's fortunes were at their nadir in 1942.