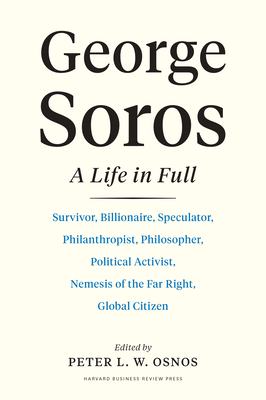 A compelling new picture of one of the most important, complex, and misunderstood figures of our time.

The name George Soros is recognized around the world. Universally known for his decades of philanthropy, progressive politics, and investment success, he is equally well known as the nemesis of the far right--the target of sustained attacks from nationalists, populists, authoritarian regimes, and anti-Semites--because of his commitment to open society, freedom of the press, and liberal democracy. At age 91, Soros still looms large on the global stage, and yet the man himself is surprisingly little understood. Asking people to describe Soros is likely to elicit different and seemingly contradictory answers. Who is George Soros, really? And why does this question matter?

Biographers have attempted to tell the story of George Soros, but no single account of his life can capture his extraordinary, multifaceted character. Now, in this ambitious and revealing new book, Soros's longtime publisher, Peter L. W. Osnos, has assembled an intriguing set of contributors from a variety of different perspectives--public intellectuals (Eva Hoffman, Michael Ignatieff), journalists (Sebastian Mallaby, Orville Schell), scholars (Leon Botstein, Ivan Krastev), and nonprofit leaders (Gara LaMarche, Darren Walker)--to paint a full picture of the man beyond the media portrayals. Some have worked closely with Soros, while others have wrestled with issues and quandaries similar to his in their own endeavors. Their collective expertise shines a new light on Soros's activities and passions and, to the extent possible, the motivation for them and the outcomes that resulted.

Through this kaleidoscope of viewpoints emerges a vivid and compelling portrait of this remarkable man's unique and consequential impact. It has truly been a life in full.

Peter L. W. Osnos is the founder of PublicAffairs, which has published all of George Soros's books since 1998. Before starting PublicAffairs, Osnos had a career in journalism at I. F. Stone's Weekly and the Washington Post and in publishing at Random House. He is the author of An Especially Good View: Watching History Happen.You can find Peter L. W. Osnos at twitter.com/peterosnos.