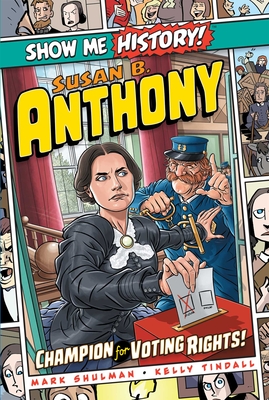 Susan B. Anthony: Champion for Voting Rights! is a biography of the woman who was at the forefront of the women’s suffrage movement in the late nineteenth and early twentieth centuries. Along with other social reformers such as Elizabeth Cady Stanton and Frederick Douglass, Anthony not only paved the way for women seeking the right to vote but also spoke out against the institution of slavery, at great personal risk. Full-color illustrations and historically accurate text make this biography an entertaining, educational, and inspiring read for those who enjoy history and graphic novels.

Mark Shulman has written more than 150 books for kids of all ages, including illustrated stories for Marvel Comics, Scholastic, Chronicle Books, Simon & Schuster, and more. Their subjects include The Incredible Hulk, Madagascar, Shamu the orca, The Amazing World of Gumball, and others. Mark started reading comics when they cost just 15 cents and hasn't stopped. He's still got Silver Surfer #1 in very fine condition, and he's not letting it go.

Kelly Tindall, the award-winning writer/artist of The Adventurers: Love You Very So Much and the Strangebeard series, makes one heck of a good sandwich. He lives in Edmonton, Canada, with his wife and two daughters. For more of his work, follow him on Instagram (@mrkellytindall).

John Roshell is a co-founder of Comicraft, the lettering and design studio best known for pioneering the process of digitally lettering comic books. He has lettered thousands of comics for Marvel, DC, Dark Horse, Blizzard, and more; created hundreds of typefaces widely used in comics and video games; and designed loads of logos for franchises like the Avengers, Daredevil, Black Panther, and Angry Birds. He lives in Santa Barbara with his wife Starshine, two boys, and a somewhat ugly dog.

Christopher Peterson has been drawing and occasionally writing comics for the past 16 years. He has self-published anthologies, one-shots, and limited series—one of which garnered a Joe Shuster Award nomination. Recent works have included the Grindhouse series from Dark Horse Comics, Mayday series from Black Mask, the Broken World series from Boom! Studios, and various others from Image Comics and Stela Comics.

Shane Corn is a veteran of the animation industry, having worked at Nickelodeon, Fox Animation Studios, FXX, Warner Bros. Animation, and Cartoon Network Studios. He currently runs a gallery and studio for individuals with developmental disabilities in Canton, Ohio, and is coloring Show Me History! graphic novels.