Escape from the Ghetto: A Story of Survival and Resilience in World War II (Hardcover) 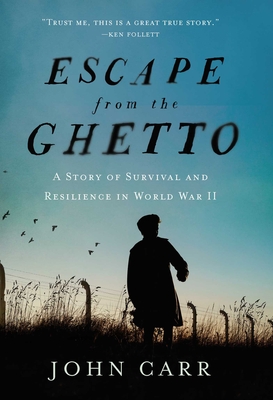 This captivating true story of one boy's flight across Europe to escape the Nazis is a tale of extraordinary courage, incredible adventure, and the relentless pursuit of freedom in the face of insurmountable challenges.

In early 1940 Chaim Herszman was locked in to the Lódz Ghetto in Poland.

Hungry, fearless, and determined, Chaim goes on scavenging missions outside the wire fence—where one day he is forced to kill a Nazi guard to protect his secret. That moment changes the course of his life and sets him on an unbelievable adventure across enemy lines.

Chaim avoids grenade and rifle fire on the Russian border, shelters with a German family in the Rhineland, falls in love in occupied France, is captured on a mountain pass in Spain, gets interrogated as a potential Nazi spy in Britain, and eventually fights for everything he believes in as part of the British Army. He protects his life by posing as an Aryan boy with a crucifix around his neck, and fights for his life through terrible and astonishing circumstances.

Escape from the Ghetto is about a normal boy who faced extermination by the Nazis in the ghetto and a Nazi deathcamp, and the extraordinary life he led in avoiding that fate. It's a bittersweet story about epic hope, beauty amidst horror, and the triumph of the human spirit.

John Carr is Henry Carr's eldest son. In Escape From the Ghetto John has recreated his father's incredible adventure during World War II. He lives in Britain.

Advance praise for Escape from the Ghetto:

"Escape from the Ghetto is a remarkable account of the unpredictable, random violence of the Nazis in Poland."
— Shepherd Express

“The extraordinary true story of one man’s daring escape from persecution during World War II. Carr reveals that even in places of evil, pockets of good exist, as evidenced by families who gave his father shelter and individuals who showed him kindness. Ultimately, the book exemplifies the human spirit at its strongest. A highly worthwhile tale of courage and perseverance in the face of seemingly insurmountable odds.”
— Kirkus, Starred Review

"A truly breathtaking story - the dramatic account of 13 year old Chaim's four year journey from the Lodz ghetto in Nazi-occupied Poland, through Germany, France, Spain and Gibraltar to London. Written with the pace and tension of a thriller, all the more gripping because it is a true story."
— Alex Gerlis, Author of Agent in Berlin

"Trust me, this is a great true story.”
— Ken Follett

"The remarkable story of a Jewish boy who killed a Nazi guard and escaped the Holocaust aged thirteen to start a new life.”
— The Times

"Extraordinary. An adventure story in the most terrible circumstances, a kid facing the most desperate dangers but taking fantastic risks with great boldness.”
— Fiona MacTaggart, Member of Parliament

“An eloquent tribute to courage and resourcefulness, Escape from the Ghetto, is a gripping page turner.”