The Dive: The Untold Story of the World's Deepest Submarine Rescue (Hardcover) 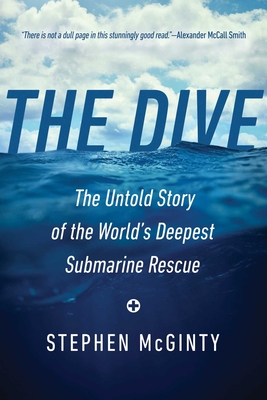 An undersea adventure narrated from the suffocating depths of the ocean floor—as time and oxygen are quickly running out—The Dive is the harrowing and heroic story of the rescue of submarine Pisces III.

They were out of their depth, out of breath and out of time. Two men, trapped in a crippled submarine.

Outside was pitch darkness and the icy chill of the ocean’s depths—and the crushing weight of 1,700 feet of water. On the surface a flotilla of ships and a rescue operation under the command of an eccentric retired naval commander. For three days, the world watched and held its breath.

On August 29th, 1973, a routine dive to the telecommunication cable that snakes along the Atlantic sea bed went badly wrong. Pisces III, with Roger Chapman and Roger Mallinson onboard, had tried to surface when a catastrophic fault suddenly sent the mini-submarine tumbling to the ocean bed—almost half a mile below.

Badly damaged, buried nose first in a bed of sand, the submarine and the two men were now trapped far beyond the depth of all previous sub-sea rescues. They had just two days’ worth of oxygen. Rescue was three days away.

The Dive reconstructs the minute by minute race against time that took place to first locate Pisces III and then execute the deepest rescue in maritime history. Ricocheting from the smoke filled ‘war room’ at Vickers, the world famous ship-building headquarters, in Barrow-in-Furness, to the surface vessels and then down to depths where three separate dive teams and the mini-submarine struggled in darkness, this thrilling adventure story shows how Britain, America, and Canada pooled their resources into a ‘Brotherhood of the Sea’ dedicated to stopping the ocean depths from claiming two of their own.

Yet at the heart of The Dive is the human drama is the relationship between Roger Chapman, the ebullient former naval officer, and Roger Mallinson, the studious engineer, sealed in a sunken sarcophagus, with air quickly running out and help a long way off. For three days they would battle against despair, fading hope, and carbon dioxide poisoning, taking the reader on an emotional ride from the depths of defeat to a glimpse of the sun-dappled surface.

Stephen McGinty is an award-winning journalist (London’s The Sunday Times) and producer of BAFTA-winning documentaries. He has published several books in Britain but The Dive is his first book to be published in America. Among his documentaries, he co-produced Fire in The Night,based on his book, which won the Audience Award at the Edinburgh International Film Festival and both RTS and BAFTA awards for "best single documentary.” Stephen lives in Scotland.

“[McGinty’s] account of the Pisces unfolds with cinematic flair, cutting back and forth between the cold, tiny sub as the oxygen dwindled and the carbon dioxide rose, and topside, as the crews cobbled together frantic rescue plans for attaching a rope to the submarine and towing it to the surface.”
— San Diego Union Tribune

"An unbelievable, completely  true story that is so taut and brilliantly told I defy anyone not to cherish every breath they take past page 80.”
— Denise Mina, New York Times bestselling author of Conviction

Praise from Britain for Steve McGinty:

“There is not a dull page in this stunningly good read. A wonderful, surprising book which I devoured in a single sitting.”
— Alexander McCall Smith

“The last word on one of the great mysteries of the Second World War.”
— The Daily Mail

“I was gripped by the immediacy of the events described. McGinty brings to the story a novelist’s keen eye for detail, ear for dialogue and sense of pace.”
— The Herald

“The year’s most surprising page-turner.”
— The Daily Telegraph