The Statesman as Thinker: Portraits of Greatness, Courage, and Moderation (Hardcover) 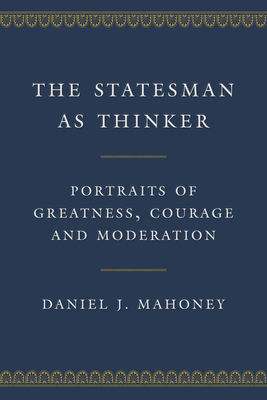 In his newest book, Daniel J. Mahoney offers refreshing historical antidotes to the displays of despotism in today's political arena.

"A brilliantly written and researched tribute to the pantheon of classically trained and thinking men of action." --Victor Davis Hanson

In The Statesman as Thinker, Daniel J. Mahoney provides thoughtful and elegant portraits of statesmen who struggled to preserve freedom during times of crisis: Cicero using all the powers of rhetoric to preserve republican liberty in Rome against Caesar's encroaching autocracy; Burke defending ordered liberty against Jacobin tyranny in revolutionary France; Tocqueville defending liberty and human dignity against blind reaction, democratic impatience, and revolutionary fanaticism; Lincoln preserving the American republic and putting an end to chattel slavery; Churchill defending liberty and law and opposing Nazi and Communist despotism; de Gaulle defending the honor of France during World War II; and Havel fighting Communism before 1989 and then leading the Czech Republic with dignity and grace.

Mahoney makes sense of the mixture of magnanimity and moderation that defines the statesman as thinker at his or her best. That admirable mixture of greatness, courage, and moderation owes much to classical and Christian wisdom and to the noble desire to protect the inheritance of civilization against rapacious and destructive despotic regimes and ideologies.

Daniel J. Mahoney is professor emeritus at Assumption University (where he taught from 1986 until 2021) and is senior writer at Law and Liberty. He has written extensively on statesmanship, French political thought, the art and political thought of Aleksandr Solzhenitsyn, conservatism, religion and politics, and various themes in political philosophy. His most recent books are The Conservative Foundations of the Liberal Order (2011, reissued in 2021), The Other Solzhenitsyn (2014, reissued in 2020), and The Idol of Our Age: How the Religion of Humanity Subverts Christianity (Encounter Books, 2018). He has written extensively for the public prints.