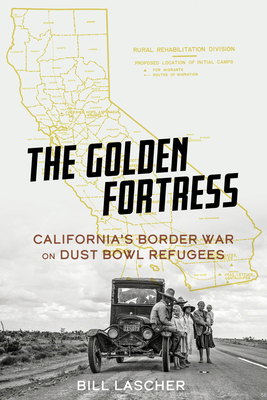 In February 1936, Los Angeles police officers drove hundreds of miles to California’s state borders with one mission: turn back anyone deemed too poor to enter.

Myths of the Golden State’s abundance enticed thousands of Americans uprooted by the Depression, but those who created those myths saw only invading criminal “hordes” that they believed just one man could stop: James “Two-Gun” Davis, Los Angeles's authoritarian police chief.

The Golden Fortress tells the story of Davis’s audacious deployment of hand-picked armed police slamming California’s door on America’s Dust Bowl refugees and Depression-displaced migrants. It depicts the sometimes deadly consequences of law enforcement politicized and weaponized against the poor, even in remote places like Modoc County, where a sheriff’s opposition to the blockade inflamed an already smoldering feud between an itinerant newsman and a publisher obsessed with her California heritage.

Davis, blessed by his city’s ruling business class and fueled by his own wild claims of communist conspiracies undermining America, deployed his “Foreign Legion” to California’s state lines, threatening democracy even as the nation's cities and rural communities juggled the burdens of economic recovery, migrant aid, and public safety.

The Golden Fortress underscores the decades-long fight over who can access the American Dream.

Bill Lascher is the author of Eve of a Hundred Midnights, a 2017 Oregon Book Awards finalist. Lascher wrote the American History Tellers podcast’s Great Depression series. His journalism appears in outlets like Atlas Obscura, Fortune, the Guardian, the Portland Monthly, and Boom: A Journal of California. He previously edited the Ventura County Reporter and was a staff writer at the Pacific Coast Business Times. A graduate of the Salt Institute for Documentary Studies, Lascher has a history degree from Oberlin and a master’s degree in specialized journalism from the University of Southern California Annenberg School of Journalism and Communication.

“A lively narrative that touches on issues that are relevant to today’s politics: the militarization of borders, freedom of movement, and the politics of fear. A great read.” —Kathryn S. Olmsted, author of Right Out of California: The 1930s and the Big Business Roots of Modern Conservatism

“The Golden Fortress is history at its most alive: gripping, detailed, and compassionate. The story of a big city and a small town in a standoff over what America should be. Bill Lascher will make you reconsider what you thought you knew about Los Angeles, California, and the United States itself.” —Eric Nusbaum, author of Stealing Home: Los Angeles, the Dodgers, and the Lives Caught in Between

“I was stunned to learn about the events that transpired in 1930s California, as written about with style and clarity in The Golden Fortress. Bill Lascher makes history come alive in this tale of the LAPD, migrants, xenophobia, economic anxiety, and the ever-present myths of California and belonging. The past feels present in his cogent, compelling history and Lascher’s analysis offers a renewed understanding of how the past echoes and informs today’s most charged debates and issues.” —Edan Lepucki, author of California: A Novel

“Histories of Los Angeles often render the LAPD’s ‘Bum Blockade’ as an amusing aside but dig no deeper. In this masterfully researched book, Bill Lascher finally gives us the full story—and what timing! This oft-forgotten episode from California’s past has never been more relevant than today.” —Nathan Masters, host and executive producer, Lost L.A.