Leadership Maxims: 12 Timeless Leadership Truths and Real-Life Examples of How They Can Drive Success (Paperback) 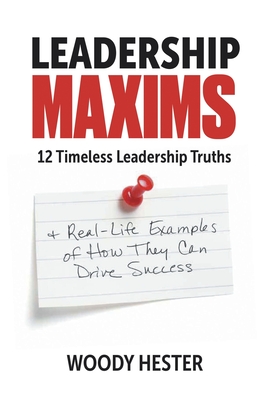 Become a better leader, right where you are, right now.

In Leadership Maxims, Woody Hester shares twelve timeless leadership truths, in the context of compelling real world stories about success and failure, that prove the twelve truths to be powerful catalysts for organizational and personal success.

In 1970, at the age of twenty-four, U.S. Army Captain Woody Hester returned from a tour of duty in Vietnam. He was assigned to a staff position at the U.S. Army Air Defense Board at Fort Bliss Texas. He was grateful. A break from the rigors of field duty and the stress of living in a combat environment were welcome, but it was his first staff job as an Army officer. It would be the first time in his professional life that he would manage the administrative side of project work and lead a diverse group of uniformed staff and Department of the Army Civilians. Projects came with tight schedules and hard deadlines. Millions of dollars were at stake. Failure would cost him, and those who relied on him, greatly.

He was scared. He didn't have time to digest, process, and learn to apply complicated leadership theory. He needed practical wisdom he could apply immediately.

NO MATTER WHAT YOU'VE ACCOMPLISHED, SOMEBODY HELPED YOU.

That was the first of a handful of his favorite leadership quotes and ideas (timeless truths) he tacked to a bulletin board over his newly assigned desk. He cut them out of trade magazines and articles he read.

What he didn't know at the time is that this particular timeless truth, the bulletin board itself, and later additions of other timeless truths would provide the practical wisdom he needed; that they would have a profoundly positive impact on his work at the Air Defense Board, and would continue to mean the difference between success and failure throughout his five-decade career in corporate and professional life.

Leadership Maxims can be read alone, and also lends itself well to group reading and discussion among leadership learning groups.

Emerging, and even seasoned leaders, stand to benefit immensely from the twelve powerful truths presented in this book.

Like the practical wisdom Woody needed at the age of twenty-four, readers can quickly internalize and apply these twelve leadership maxims, immediately becoming a better leader.