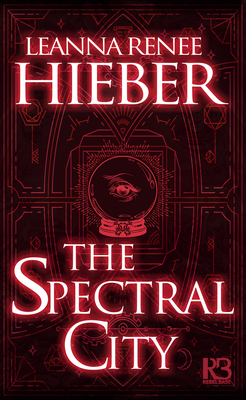 This is book number 1 in the A Spectral City Novel series.

Solving crime isn’t only for the living.

In turn-of-the century New York City, the police have an off-the-books spiritual go-to when it comes to solving puzzling corporal crimes . . .

Her name is Eve Whitby, gifted medium and spearhead of The Ghost Precinct. When most women are traveling in a gilded society that promises only well-appointed marriage, the confident nineteen-year-old Eve navigates a social circle that carries a different kind of chill. Working with the diligent but skeptical Lieutenant Holtzmann, as well as a group of fellow psychics and wayward ghosts, Eve proves her worth against a world of charlatans, devious magicians, and shameless tricksters, and a scandalous cabal covering for a dangerous underground ring.

But as accustomed as Eve is to ghastly crimes and all matters of the uncanny, even she is unsettled by her department’s latest mystery. Her ghostly conduits are starting to disappear one by one as though snatched away by some evil force determined to upset the balance between two realms, and most important—destroy the Ghost Precinct forever. Now Eve must brave the darkness to find the vanished souls. She has no choice. It’s her job to make sure no one is ever left for dead.

“Will have readers chomping at the bit for more.”
—Suspense Magazine on Eterna and Omega.

"The Spectral City is a spooky thrill - lovely and bold, with terrific characters and a glorious gaslamp setting that's filled to the brim with beauty and peril."
--Cherie Priest, Locus Award Winning Author of Boneshaker

Actress, playwright and author Leanna Renee Hieber is the award-winning, bestselling writer of gothic Victorian fantasy novels for adults and teens. Her novels such as the Strangely Beautiful saga, and the Eterna Files series have garnered numerous regional genre awards, including four Prism awards, and have been selected as “Indie Next” and national book club picks. She lives in New York City where she is a licensed ghost tour guide and has been featured in film and television  shows like Boardwalk Empire. Follow her on Twitter@leannarenee, or visit www.leannareneehieber.com.