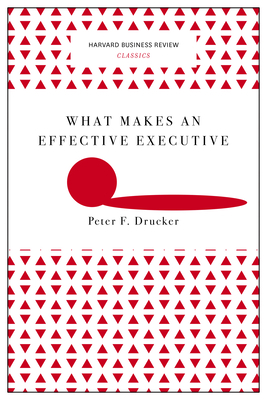 In his sixty-five-year consulting career, Peter F. Drucker, widely regarded as the father of modern management, identified eight practices that can make any executive effective. Leadership is not about charisma or extroversion. It's about these practices: Effective executives ask, "What needs to be done?" They also ask, "What is right for the enterprise?" They develop action plans. They take responsibility for decisions. They take responsibility for communicating. They focus on opportunities rather than problems. They run productive meetings. And they think and say "we" rather than "I." Since 1922, Harvard Business Review has been a leading source of breakthrough ideas in management practice. The Harvard Business Review Classics series now offers you the opportunity to make these seminal pieces a part of your permanent management library. Each highly readable volume contains a groundbreaking idea that continues to shape best practices and inspire countless managers around the world.

Peter F. Drucker (1909-2005) is one of the best-known and most widely influential thinkers on the subject of management theory and practice, and his writings contributed to the philosophical and practical foundations of the modern corporation.Often described as the father of modern management theory, Drucker explored how people are organized across the business, government, and nonprofit sectors of society; he predicted many of the major business developments of the late twentieth century, including privatization and decentralization, the rise of Japan to economic world power, the critical importance of marketing, and the emergence of the information society with its implicit necessity of lifelong learning. In 1959, Drucker coined the term knowledge worker and in his later life considered knowledge-worker productivity to be the next frontier of management.Peter Drucker died on November 11, 2005, in Claremont, California. He had four children and six grandchildren.You can find more about Peter F. Drucker at cgu.edu/center/the-drucker-institute.