The Great Air Race: Glory, Tragedy, and the Dawn of American Aviation (Hardcover) 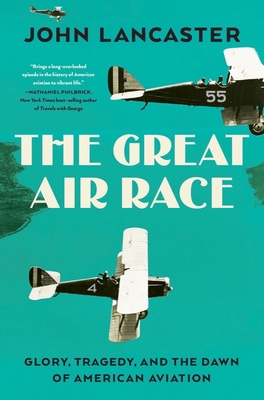 The untold, almost unbelievable, story of the daring pilots who risked their lives in an unprecedented air race in 1919—and put American aviation on the map.

Years before Charles Lindbergh’s flight from New York to Paris electrified the nation, a group of daredevil pilots, most of them veterans of the World War I, brought aviation to the masses by competing in the sensational transcontinental air race of 1919. The contest awakened Americans to the practical possibilities of flight, yet despite its significance, it has until now been all but forgotten.

In The Great Air Race, journalist and amateur pilot John Lancaster finally reclaims this landmark event and the unheralded aviators who competed to be the fastest man in America. His thrilling chronicle opens with the race’s impresario, Brigadier General Billy Mitchell, who believed the nation’s future was in the skies. Mitchell’s contest—critics called it a stunt—was a risky undertaking, given that the DH-4s and Fokkers the contestants flew were almost comically ill-suited for long-distance travel: engines caught fire in flight; crude flight instruments were of little help in clouds and fog; and the brakeless planes were prone to nosing over on landing.

Yet the aviators possessed an almost inhuman disregard for their own safety, braving blizzards and mechanical failure as they landed in remote cornfields or at the edges of cliffs. Among the most talented were Belvin “The Flying Parson” Maynard, whose dog, Trixie, shared the rear cockpit with his mechanic, and John Donaldson, a war hero who twice escaped German imprisonment. Jockeying reporters made much of their rivalries, and the crowds along the race’s route exploded, with everyday Americans eager to catch their first glimpse of airplanes and the mythic “birdmen” who flew them.

The race was a test of endurance that many pilots didn’t finish: some dropped out from sheer exhaustion, while others, betrayed by their engines or their instincts, perished. For all its tragedy, Lancaster argues, the race galvanized the nation to embrace the technology of flight. A thrilling tale of men and their machines, The Great Air Race offers a new origin point for commercial aviation in the United States, even as it greatly expands our pantheon of aviation heroes.

John Lancaster is a journalist who spent most of his career at the Washington Post, including eight years as a foreign correspondent. His writing has also appeared in National Geographic and the New Republic, among other publications. He lives in Washington, DC.

Among the many virtues of John Lancaster’s delightful The Great Air Race is how vividly it conveys the entirely different world of aviation at the dawn of the industry, a century ago . . . My favorite book about Antarctic exploration is The Worst Journey in the World, by the British writer Apsley Cherry-Garrard, a survivor of a doomed expedition in 1910. The Great Air Race has the same horrific but heroic fascination. Page by page you think, What else can go wrong? Page by page, you want to learn more . . . This is Lancaster’s first book. But he deftly pulls off some tricks that are harder than they seem. He embeds social, economic and political history as he writes—for instance, how coast-to-coast air travel fits into the history of wagon trails, railroads and highways connecting the continent . . . I have read a lot about aviation and the aircraft industry over the years, but almost everything in this tale was new to me. You might take it on your next airline flight, pause to look out the window and spare a thought for those who helped make it all possible.

Although the race took place during peacetime, Lancaster is in solid military-history territory… The race itself was fraught with peril, and the author recounts in great detail the inherent struggles of trying to fly cross-country when there were no navigational aids, and the weather could prove deadly. In the end, there were numerous crashes, injuries, and fatalities, and Lancaster covers all of it, making for thrilling reading. The book also includes outstanding photographs. An excellent read for those interested in aviation, the military, and American history.
— Colleen Mondor - Booklist

A dramatic account of the massive 1919 cross-country air race, ‘the likes of which the world had never seen.’… In this well-researched text, Lancaster delivers an expert description of the planes (mostly ex-WWI fighters) and biographies of the volunteers… Entertaining fireworks during the early days of flight.
— Kirkus Reviews

[An] energetic and entertaining history of ‘the greatest airplane race ever flown,’ a 1919 round-trip race between San Francisco and Long Island. . . . Lancaster brings to vivid life the eccentric cast of racers. . . The result is a high-flying history of aviation’s white-knuckle early days.
— Publishers Weekly