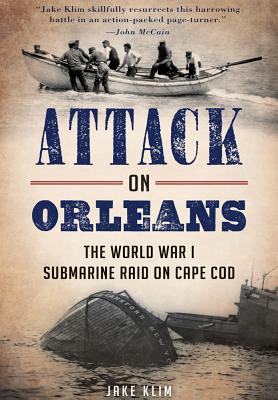 Author Jake Klim chronicles the attack from the first shell fired to the aftermath and celebrates the resilience of Orleans at war.

On the morning of July 21, 1918--in the final year of the First World War--a new prototype of German submarine surfaced three miles off the coast of Cape Cod, Massachusetts. The vessel attacked an unarmed tugboat and its four barges. A handful of the shells fired by the U-boat's deck guns struck Nauset Beach, giving the modest town of Orleans the distinction of being the only spot in the United States to receive enemy fire during the entire war. On land, lifesavers from the U.S. Coast Guard launched a surfboat under heavy enemy fire to save the sailors trapped aboard the tug and barges. In the air, seaplanes from the Chatham Naval Air Station dive-bombed the enemy raider with payloads of TNT.