Boston Made: From Revolution to Robotics, Innovations that Changed the World (Hardcover) 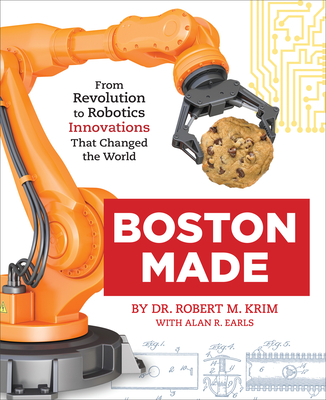 A fascinating look at how Boston became and remains a global center for innovation--told through 50 world-changing inventions.


“Robert Krim is a long-time champion of the Boston area’s history of innovation, finding remarkable examples of ingenuity and creativity going back centuries and continuing today. He shows how a culture of innovation can make a small place a beacon of hope for the world, by developing the fresh ideas and useful discoveries that make a difference in every part of life.”
—Rosabeth Moss Kanter, Harvard Business School professor and author of Think Outside the Building: How Advanced Leaders Can Change the World One Smart Innovation at a Time

Since the 1600s, Boston has been at the forefront of world-changing innovation from starting the country's first public school to becoming the first state to end slavery and giving birth to the telephone. Boston was the site of the first organ transplant and more recent medical and biotech breakthroughs that have saved the lives of thousands. That's not to mention pioneering advances in everything from rockets to robotics.

In total, Boston-area inventors have contributed more than four hundred stand-out social, scientific, and commercial innovations and uncounted numbers that are less well known. Boston Made tells the absorbing stories of 50 of these - and why they are no accident.

In fact, fresh waves of innovation have brought the city back from four major economic collapses. Dr. Robert Krim lays out a set of "innovation drivers," including strong entrepreneurship, local funding, and networking. From boom to decline and back to boom, Boston has maintained an ability to reinvent, and build anew.

Dr. Krim with technologist Alan Earls have developed and outlined a new interpretation of how a resilient city has flourished. At a time when the national and global economy is reeling from pandemic shockwaves, the authors have laid out what a dynamic world-class city has done in the face of adversity to find a fresh and successful path forward.

Robert Krim is the founder and leader of the Boston History and Innovation Collaborative, for which he assembled a multi-university research team who worked with hundreds of organizations and businesses studying nearly five hundred innovations that changed the world and were developed in Greater Boston. That research evolved into "Four Centuries of Innovation," a permanent exhibit at Boston Logan International Airport. He has a BA from Harvard and earned a master's in US History, a master's in Economics, and a joint PhD/MBA from Boston College. A professor at Framingham State University, Krim founded the Entrepreneur Innovation Center.

Alan R. Earls is a Boston-area writer who has covered high-tech innovation for more than thirty years. He has authored or edited more than a dozen books on innovative enterprises such as Polaroid, Digital Equipment Corporation, and Raytheon, as well as regional histories.