The Sports Gene: Inside the Science of Extraordinary Athletic Performance (Paperback) 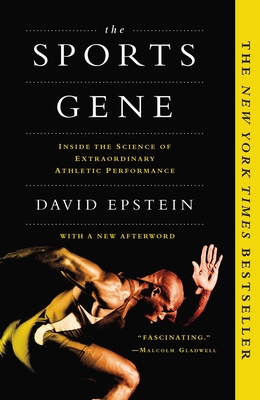 The New York Times bestseller – with a new afterword about early specialization in youth sports – from the author of Range: Why Generalists Triumph in a Specialized World.

The debate is as old as physical competition. Are stars like Usain Bolt, Michael Phelps, and Serena Williams genetic freaks put on Earth to dominate their respective sports? Or are they simply normal people who overcame their biological limits through sheer force of will and obsessive training?

In this controversial and engaging exploration of athletic success and the so-called 10,000-hour rule, David Epstein tackles the great nature vs. nurture debate and traces how far science has come in solving it. Through on-the-ground reporting from below the equator and above the Arctic Circle, revealing conversations with leading scientists and Olympic champions, and interviews with athletes who have rare genetic mutations or physical traits, Epstein forces us to rethink the very nature of athleticism.

David Epstein is an award-winning investigative reporter at ProPublica, and was previously a senior writer at Sports Illustrated. He earned All-East honors on Columbia University’s varsity track squad, and has a master’s degree in environmental science.

“I can’t remember a book that has fascinated, educated—and provoked—me as much as The Sports Gene. Epstein has changed forever the way we measure elite athletes and their achievements.”—Malcom Gladwell

“Many researchers and writers are reluctant to tackle genetic issues because they fear the quicksand of racial and ethnic stereotyping. To his credit, Epstein does not flinch.”

“Epstein’s rigour in seeking answers and insights is as impressive as the air miles he must have accumulated . . . his book is dazzling and illuminating.”

“The narrative follows Mr. Epstein’s search for the roots of elite sport performance as he encounters characters and stories so engrossing that readers may not realize they’re receiving an advanced course in genetics, physiology, and sports medicine.”

“An important book . . . The Sports Gene is bound to put the cat among the pigeons in the blank-slate crowd who think that we can all be equal as long as we equalize environmental inputs such as practice.”

“This is the book I’ve been waiting for since the early 1960s. I can’t imagine that anyone interested in sports—particularly the fascinating question, ‘How do the best athletes become the best?’—will be any less enthralled than I.”

“A must-read for athletes, parents, coaches, and anyone who wants to know what it takes to be great.”

—George Dohrmann, author of Play Their Hearts Out