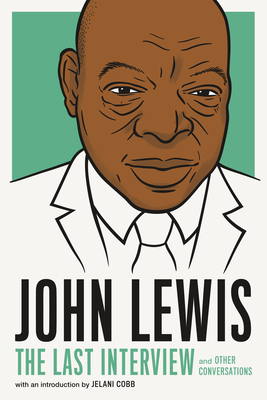 Featuring interviews of civil rights activist and congressman John Lewis at almost every stage of his career, this collection illustrates why Lewis has become a human rights icon and remains an inspiration to activists today

Throughout John Lewis’s long and storied career he maintained a seemingly unwavering hope for a better future. This hope can be traced throughout the inteviews collected here. From a young activist testifying in the aftermath of Bloody Sunday to recounting the violence he met as a Freedom Rider to an elder statesman inspired by today's civil rights activists, this collection forms a portrait of a man whose life was spent fighting for a better world and never lost hope.

John Lewis (1940 – 2020) was a civil right activist and U.S. congressman. Inspired by the activism of Martin Luther King, Jr., Lewis became involved in the civil rights movement by participating in lunch counter sit-ins as part of the Nashville Student Movement and went on to become one of the original Freedom Riders in 1961. A founding member of the Student Nonviolent Coordinating Committee, he became its chairman in 1963, was an organizer of the infamous “Bloody Sunday” march on the Edmund Pettis Bridge in Selma, Alabama, and a speaker at the March on Washington. Elected to Congress in 1986, Lewis served seventeen terms representing most of Atlanta, Georgia. He received the Presidential Medal of Freedom in 2011.  Jelani Cobb is a staff writer for The New Yorker and the Ira A. Lipman Professor of Journalism at Columbia Journalism School. His most recent book is The Substance of Hope: Barack Obama and the Paradox of Progress.

"From Alabama’s notorious Edmund Pettus Bridge to the marbled corridors of Washington, Lewis was always up to “good trouble,” imbuing each word and deed with passion and persuasion... John Lewis: The Last Interview is, in a sense, his audition as a national figure." -- Oprah Daily