In the Heart of the Sea: The Tragedy of the Whaleship Essex (Movie Tie-in) (CD-Audio) 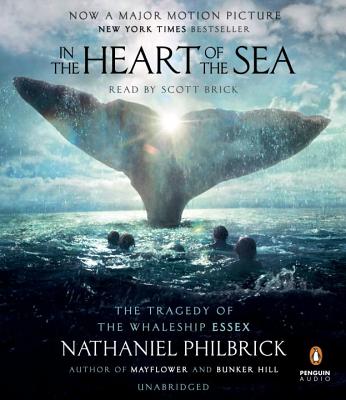 By Nathaniel Philbrick, Scott Brick (Read by)
$19.99
Email or call for price.

From the author of In the Hurricane's Eye and Valiant Ambition, the riveting and critically acclaimed bestseller and a major motion picture starring Chris Hemsworth, directed by Ron Howard.

Chris Hemsworth, Cillian Murphy, Ben Whishaw, and Brendan Gleeson star in a film based on this National Book Award–winning account of the true events behind Moby Dick.

In 1820, the whaleship Essex was rammed and sunk by an angry sperm whale, leaving the desperate crew to drift for more than ninety days in three tiny boats. Nathaniel Philbrick uses little-known documents and vivid details about the Nantucket whaling tradition to reveal the chilling facts of this infamous maritime disaster. In the Heart of the Sea—and now, its epic adaptation for the screen—will forever place the Essex tragedy in the American historical canon.

Nathaniel Philbrick grew up in Pittsburgh, Pennsylvania, and earned a BA in English from Brown University and an MA in America Literature from Duke University, where he was a James B. Duke Fellow. He was Brown University’s first Intercollegiate All-American sailor in 1978, the same year he won the Sunfish North Americans in Barrington, RI. After working as an editor at Sailing World magazine, he wrote and edited several books about sailing, including The Passionate Sailor, Second Wind, and Yaahting: A Parody.

In 1986, Philbrick moved to Nantucket with his wife Melissa and their two children. In 1994, he published his first book about the island’s history, Away Off Shore, followed by a study of the Nantucket’s native legacy, Abram’s Eyes. He was the founding director of Nantucket’s Egan Maritime Institute and is still a research fellow at the Nantucket Historical Association.

In 2000, Philbrick published the New York Times bestseller In the Heart of the Sea, which won the National Book Award for nonfiction. The book is the basis of the forthcoming Warner Bros. motion picture “Heart of the Sea,” directed by Ron Howard and starring Chris Hemsworth, Cillian Murphy, Brendan Gleeson, Benjamin Walker, Ben Wishaw, and Tom Holland, which is scheduled for release in March, 2015. The book also inspired a 2001 Dateline special on NBC as well as the 2010 two-hour PBS American Experience film “Into the Deep” by Ric Burns.

His next book was Sea of Glory, published in 2003, which won the Theodore and Franklin D. Roosevelt Naval History Prize and the Albion-Monroe Award from the National Maritime Historical Society. The New York Times Bestseller Mayflower was a finalist for both the 2007 Pulitzer Prize in History and the Los Angeles Times Book Award, won the Massachusetts Book Award for nonfiction, and was named one the ten Best Books of 2006 by the New York Times Book Review. Mayflower is currently in development as a limited series on FX.

In 2010, he published the New York Times bestseller The Last Stand, which was named a New York Times Notable book, a 2010 Montana Book Award Honor Book, and a 2011 ALA Notable Book. Philbrick was an on-camera consultant to the two-hour PBS American Experience film “Custer’s Last Stand” by Stephen Ives. The book is currently being adapted for a ten-hour, multi-part television series. The audio book for Philbrick’s Why Read Moby-Dick? (2011) made the ALA's Listen List in 2012 and was a finalist for the New England Society Book Award.

Philbrick’s latest New York Times bestseller, Bunker Hill:  A City, a Siege, a Revolution, was published in 2013 and was awarded both the 2013 New England Book Award for Non-Fiction and the 2014 New England Society Book Award. Bunker Hill won the 2014 book award from the Society of Colonial Wars, and has been optioned by Warner Bros. for feature film adaptation with Ben Affleck attached to direct.

Philbrick’s writing has appeared in Vanity Fair, the New York Times Book Review, the Wall Street Journal, the Los Angeles Times, and the Boston Globe. He has appeared on the Today Show, the Morning Show, Dateline, PBS’s American Experience, C-SPAN, and NPR. He and his wife still live on Nantucket.

"Fascinating...One of our country's great adventure stories...when it comes to extremes, In the Heart of the Sea is right there."--The Wall Street Journal

"A book that gets in your bones...Philbrick has created an eerie thriller from a centuries old tale....Scrupulously researched and eloquently written...it would have earned Melville's admiration."--The New York Times Book Review

"[Told] with verve and authenticity...a classic tale of the sea."--San Francisco Chronicle

"Nathaniel Philbrick has taken one of the most horrifying stories in maritime history and turned it into a classic....One of the most chilling books I have ever read."--Sebastian Junger, author of The Perfect Storm