The Unraveling: High Hopes and Missed Opportunities in Iraq (Paperback) 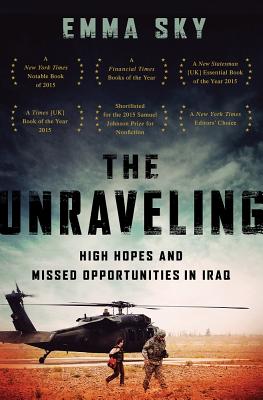 When Emma Sky volunteered to help rebuild Iraq after the overthrow of Saddam Hussein in 2003, she had little idea what she was getting in to. Her assignment was only supposed to last three months. She went on to serve there longer than any other senior military or diplomatic figure, giving her an unrivaled perspective of the entire conflict.

As the representative of the Coalition Provisional Authority in Kirkuk in 2003 and then the political advisor to US General Odierno from 2007-2010, Sky was valued for her knowledge of the region and her outspoken voice. She became a tireless witness to American efforts to transform a country traumatized by decades of war, sanctions, and brutal dictatorship; to insurgencies and civil war; to the planning and implementation of the surge and the subsequent drawdown of US troops; to the corrupt political elites who used sectarianism to mobilize support; and to the takeover of a third of the country by the Islamic State.

With sharp detail and tremendous empathy, Sky provides unique insights into the US military as well as the complexities, diversity, and evolution of Iraqi society. The Unraveling is an intimate insider's portrait of how and why the Iraq adventure failed and contains a unique analysis of the course of the war. Highlighting how nothing that happened in Iraq after 2003 was inevitable, Sky exposes the failures of the policies of both Republicans and Democrats, and the lessons that must be learned about the limitations of power.

Emma Sky is a senior fellow at Yale University's Jackson Institute. She worked in the Middle East for twenty years and was made an Officer of the Order of the British Empire for her services in Iraq. She lives in New Haven, Connecticut.

“A fast-paced diary based entirely on [Sky's] recollections and enlivened by her skillful character sketches.” -Foreign Affairs

“Hers was a fascinating world of senior military and diplomatic figures, many of them of the highest quality…She knew all the leading Iraqi politicians, many of whom regarded her as a personal friend. She saw much of Iraq and had some hair-raising experiences. And she always kept her sense of opposition to what was being done to the country. Many people likened her to Gertrude Bell, the British political adviser who helped to create Iraq, and in some ways they were right.” -John Simpson, New Statesman

“One might call the events Sky describes as a comedy of errors, except that there's nothing comedic about it. A tragedy of errors, then, crisply recounted by one who was there.” -Kirkus Reviews

“Sky skillfully weaves a range of vignettes into her overall story, ranging from dealing with a host of important figures within the Maliki government to meeting then-British Prime Minister Tony Blair and interacting with American battalion and company commanders—including some rather angry exchanges with senior staff officers. Her vignettes and analysis show both her evolving perception of coalition operations and their effect on Iraq as well as an insight into Odierno's ever-growing appreciation of his situation… This important book adds a level of detail to the story of our Iraq venture… Read this book. It is worth the time required to both understand her point of view—as Odierno put it, “another perspective”—and reflect on what happened.” -ARMY Magazine

“As an insider's account, The Unraveling is full of descriptions of meetings, events, and key personalities—both Iraqi and American. Of the latter, Sky is especially gifted in capturing, in just a few sentences, the quirks, flaws, and virtues of the individuals who worked in Iraq or who came through as visiting dignitaries. To her credit, she's bipartisan in her skewering… Given Sky's role in Kirkuk, and later under Odierno, The Unraveling is especially useful in detailing just how complex the reconciliation process was within Iraq's splintered society.” -Weekly Standard

“…A charming, insightful account of Sky's remarkable odyssey, of her experiences among Americans and Iraqis.” -Max Hastings, Sunday Times

“America's commanders in Iraq combined great rank with even greater self belief….So it says much for Ray Odierno, a US commanding general, that for three of Iraq's bloodiest years, he chose to have a self-confessed anti-war “tree-hugger” by his side.” -Colin Freeman, Telegraph

“A deft, nuanced, and often funny account of her years as a civilian official in Iraq.” -The New York Review of Books

“A memoir that may be the best book to date on the American war in Iraq…Sky brings unique and unmatched credentials to her analysis of the war. … Her keen intellect and dry, self-effacing wit make the book a thought-provoking, informative, and enjoyable read. With no personal or political axes to grind, Sky's analysis of events and personalities focuses on her immense expertise and access to key figures. This authoritative first-person account is a must-read for anyone who wants a deeper understanding of the complexity of the Iraq war, and the road to the current crises with the Islamic State.” -Publishers Weekly, STARRED REVIEW

“Sky's narrative is a valuable addition to recent history, even though she can only provide part of the larger puzzle that is Iraq. What she experienced is relevant, and her story and perspective contribute to the ongoing effort to understand and explain the tragic aftermath of the much-criticized Iraq War.” -Booklist

"A scholar and a strategist, Sky's political perception alone makes worthwhile reading, including a preface that is as succinct a synopsis of Iraq today as you will find: ISIS, or Da'ash, 'is the hideous product of a sacralised determinism born out of secular failure.'” -Military Times

“The Unravelling reads almost like a novel: a detailed and darkly humorous account that tries to understand everyone involved, Iraqis and Americans, on their own terms. Sky's character sketches are as tolerant as they are critical, and her argumentative, chirpy and intelligent personality is thoroughly engaging…. The Unravelling is an indispensable tool for understanding the background to this failure." -The Guardian

“The Unraveling: High Hopes and Missed Opportunities in Iraq is entertaining because Sky is a wry and intelligent companion. It is sad for its account of how the Obama administration squandered what Sky views as the victory that the surge had snatched from the first catastrophic years of U.S. occupation. It is enlightening for how it helps us unlearn much of what we think we know — for example, that ‘ancient hatreds' rending the Shiite, Sunni and Kurds make Iraq a hopeless case.” -Fred Hiatt, Washington Post

“To counter Iran in Iraq and prevent the alienation that created ISIS would have required…perhaps, a thousand Emma Skys. But there was only one of those.” -Christopher Dickey, New York Times Book Review

"A radiant and beautifully written account, at turns funny and sad, of [Sky's] service in Iraq." -Wall Street Journal

"[A] sober, thorough and ultimately heart-rending examination of what, to this day, keeps Iraq unstable, unhappy and a never-ending foreign policy disaster...a book with a rare perspective... What Sky produced, years later, is worth applauding. The Unravelling may be the most straightforward account yet—and the best that Britain will have for a while—of the failures in Iraq." -Financial Times

"Sky's book...is the essential text on how everything fell apart." -Dexter Filkins, NewYorker.com

"While there have been many accounts penned about the U.S. involvement in Iraq, Sky's (senior fellow, Yale Univ. Jackson Inst.) account supersedes others. As someone who was directly enmeshed in the efforts to help rebuild Iraq after the death of former Iraqi leader Saddam Hussein, Sky is able to provide intimate, and at times uncomfortable, details about what went into making Iraq a democracy. Describing situations from undergoing a firestorm on her apartment to enjoying cultural dinners and celebrations, the author endeavors—and mostly succeeds—in providing a comprehensive view of a tenuous situation. Sky's emotive writing makes it impossible to lump her in with generalizations about people who participated in the rebuilding of Iraq, and her poignant longing for her home and her own culture make her sympathetic. The author's at other times analytical tone will appeal to champions of empiricism, and her detailed descriptions of the vibrant and complex cultures at odds in the region will draw in enthusiasts of global culture and anthropology. It becomes undeniable that Sky was very passionate about her work in Iraq. Her book will create a similar enthusiasm in her readers. VERDICT At once informative and emotional, this book will find a wide audience of adult readers, especially those interested in global politics and current events.” -Library Journal