Democracy at Work: A Cure for Capitalism (Paperback) 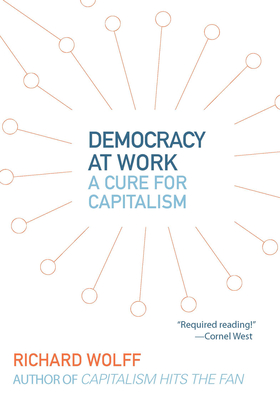 By Richard D. Wolff
$15.00
Ships from our supplier - you choose to your home or to the store

Richard Wolff is the leading socialist economist in the country. This book is required reading for anyone concerned about a fundamental transformation of the ailing capitalist economy.--Cornel West

"Richard Wolff's constructive and innovative ideas suggest new and promising foundations for a much more authentic democracy and sustainable and equitable development, ideas that can be implemented directly and carried forward. A very valuable contribution in troubled times."--Noam Chomsky

Capitalism as a system has spawned deepening economic crisis alongside its bought-and-paid-for political establishment. Neither serves the needs of our society. Whether it is secure, well-paid, and meaningful jobs or a sustainable relationship with the natural environment that we depend on, our society is not delivering the results people need and deserve.

One key cause for this intolerable state of affairs is the lack of genuine democracy in our economy as well as in our politics. The solution requires the institution of genuine economic democracy, starting with workers directing their own workplaces, as the basis for a genuine political democracy.

Here Richard D. Wolff lays out a hopeful and concrete vision of how to make that possible, addressing the many people who have concluded economic inequality and politics as usual can no longer be tolerated and are looking for a concrete program of action.

Richard D. Wolff is professor of economics emeritus at the University of Massachusetts, Amherst. He is currently a visiting professor at the New School for Social Research in New York. Wolff is the author of many books, including Capitalism Hits the Fan: The Global Economic Meltdown and What to Do About It. He hosts the weekly hour-long radio program Economic Update on WBAI (Pacifica Radio) and writes regularly for The Guardian, Truthout.org, and MRZine.

Richard D. Wolff is a American economist, well-known for his work on Marxist economics, economic methodology and class analysis. Wolff received his Ph.D. in economics from Yale University in 1969. Wolff taught at the City College of New York from 1969-1973, and teaches graduate seminars and undergraduate courses and direct dissertation research in economics at the University of Massachusetts Amherst. He has authored numerous articles and books and has given many public lectures at colleges and universities (Notre Dame, University of Missouri, Washington College, Franklin and Marshall College, New York University, etc.) to community and trade union meetings, in high schools, etc. He also maintains an extensive schedule of media interviews (on many independent radio stations such as KPFA in Berkeley, KPFK in Los Angeles, WBAI in New York, National Public Radio stations, the Real News Network, the Glenn Beck Show, and so on).

Imagine a country where the majority of the population reaps the majority of the benefits for their hard work, creative ingenuity, and collaborative efforts. Imagine a country where corporate losses aren't socialized, while gains are captured by an exclusive minority. Imagine a country run as a democracy, from the bottom up, not a plutocracy from the top down. Richard Wolff not only imagines it, but in his compelling, captivating and stunningly reasoned new book, Democracy at Work, he details how we get there from here and why we absolutely must.
Nomi Prins, Author of It Takes a Pillage and Black Tuesday

"Richard Wolff is the leading socialist economist in the country. This book is required reading for anyone concerned about a fundamental transformation of the ailing capitalist economy!" - Cornel West

"Ideas of economic democracy are very much in the air, as they should be,
with increasing urgency in the midst of today's serious crises. Richard Wolff's
constructive and innovative ideas suggest new and promising foundations for
much more authentic democracy and sustainable and equitable development,
ideas that can be implemented directly and carried forward. A very valuable
contribution in troubled times." Noam Chomsky

Bold, thoughtful, transformativea powerful and challenging vision of that takes us beyond both corporate capitalism and state socialism. Richard Wolff at his best!
Gar Alperovitz, author of America Beyond Capitalism; Lionel R. Bauman Professor of Political Economy, University of Maryland

Praise for Capitalism Hits the Fan (book and DVD)

With unerring coherence and unequaled breadth of knowledge, Rick Wolff offers a rich and much needed corrective to the views of mainstream economists and pundits. It would be difficult to come away from this... with anything but an acute appreciation of what is needed to get us out of this mess.
Stanley Aronowitz, Distinguished Professor of Sociology and Urban Education, City University of New York