12 Angry Men: True Stories of Being a Black Man in America Today (Paperback) 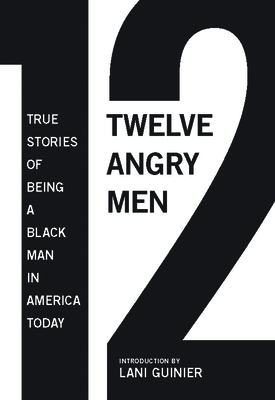 "Beautifully written, painfully honest" first-person accounts of racial profiling, as experienced by a dozen black men from all over America (Michelle Alexander, author of The New Jim Crow). In an era of contentious debate about controversial police practices and, more broadly, the significance of implications of race throughout American life, 12 Angry Men is an urgent, moving, and timely book that exposes "a serious impediment to the collective American Dream of a colorblind society" (Pittsburgh Urban Media). In this "extraordinarily compelling" book, a dozen eloquent authors tell their own personal stories of being racially profiled. From a Harvard law school student tackled by a security guard on the streets of Manhattan, a federal prosecutor detained while walking in his own neighborhood in Washington, DC, and a high school student in Colorado arrested for "loitering" in the subway station as he waits for the train home, to a bike rider in Austin, Texas, a professor at a Big Ten university in Iowa, and the head of the ACLU's racial profiling initiative (who was pursued by national guardsmen after arriving on the red-eye in Boston's Logan airport), here are true stories of law-abiding Americans who also happen to be black men (Publishers Weekly). Cumulatively, the effect is staggering, and will open the eyes of anyone who thinks we live in a "post-racial" or "colorblind" America. "Powerful." --Jet "This is raw testimony intended to vividly capture the invasions of privacy and the assaults on dignity that always accompany unreasonable government intrusion." --Kirkus Reviews

Gregory S. Parks is an attorney in private practice and a co-editor of Critical Race Realism (The New Press). He lives in Washington, D.C. Matthew W. Hughey is an assistant professor of sociology at Mississippi State University, where he lives, and is the co-editor of The Obamas and a (Post) Racial America. Lani Guinier, a professor at Harvard Law School, was the first black woman ever to head the civil rights division of the Justice Department. She is the author of the critically acclaimed book The Miner's Canary and lives in Cambridge, Massachusetts.