Is Remote Warfare Moral?: Weighing Issues of Life and Death from 7,000 Miles (Hardcover) 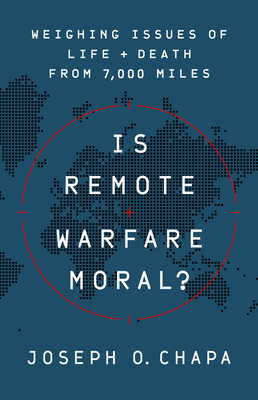 America is at an important turning point. Remote warfare is not just a mainstay of post–9/11 wars, it is a harbinger of what lies ahead—a future of high-tech, artificial intelligence–enabled, and autonomous weapons systems that raise a host of new ethical questions. Most fundamentally, is remote warfare moral? And if so, why?

Through gripping accounts of remote pilots making life-and-death decisions and analysis of high-profile cases such as the killing of Iranian high government official General Qasem Soleimani, Chapa examines remote warfare within the context of the just war tradition, virtue, moral psychology, and moral responsibility. He develops the principles we should use to evaluate its morality, especially as pilots apply human judgment in morally complex combat situations. Moving on to the bigger picture, he examines how the morality of human decisions in remote war is situated within the broader moral context of US foreign policy and the future of warfare.

Joseph O. Chapa is a US Air Force officer and holds a PhD in philosophy from the University of Oxford. He has served as a Predator pilot and instructor of philosophy at the Air Force Academy. Dr. Chapa has published on military ethics in academic journals including Social Theory and Practice and The Journal of Military Ethics, and in online venues such as War on the Rocks and The Strategy Bridge. He currently leads the Artificial Intelligence Cross-Functional Team in Air Force Futures and serves as the Department of the Air Force's chief responsible AI ethics officer.

“[E]ven those who have already made up their minds about the morality of war will find a challenging examination of questions to which we are still developing answers…A hard-nosed look at the morality of drone warfare from a writer who has seen it close-up.”—Kirkus

“Chapa integrates a mastery of moral philosophy and psychology with his warfighting expertise to fill an important lacuna in the literature addressing the morality of drone strikes.”—Journal of Military Ethics