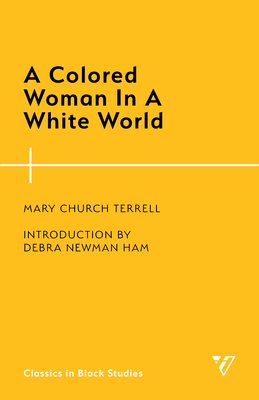 Mary Church Terrell (1863-1954) was one of the most remarkable women of the late nineteenth and early twentieth centuries. Active in both the civil rights movement and the campaign for women's suffrage, Terrell was a leading spokesperson for the National American Woman Suffrage Association, the first president of the National Association of Colored Women, and the first black woman appointed to the District of Columbia Board of Education and the American Association of University Women. She was also a charter member of the National Association for the Advancement of Colored People. In this autobiography, originally published in 1940, Terrell describes the important events and people in her life.Terrell began her career as a teacher, first at Wilberforce College and then at a high school in Washington, D.C., where she met her future husband, Robert Heberton Terrell. After marriage, the women's suffrage movement attracted her interests and before long she became a prominent lecturer at both national and international forums on women's rights. A gifted speaker, she went on to pursue a career on the lecture circuit for close to thirty years, delivering addresses on the critical social issues of the day, including segregation, lynching, women's rights, the progress of black women, and various aspects of black history and culture. Her talents and many leadership positions brought her into close contact with influential black and white leaders, including Frederick Douglass, Booker T. Washington, Paul Laurence Dunbar, Robert Ingersoll, Elizabeth Cady Stanton, Susan B. Anthony, Jane Addams, and others. With an introduction by Debra Newman Ham, professor of history at Morgan State University, this edition of Mary Church Terrell's autobiography will be of interest to students and scholars of both women's studies and African American history.

Mary Church Terrell was one of the first African-American women to earn a college degree, and became known as a national activist for civil rights and suffrage.