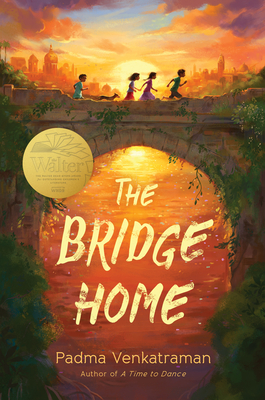 "Readers will be captivated by this beautifully written novel about young people who must use their instincts and grit to survive. Padma shares with us an unflinching peek into the reality millions of homeless children live every day but also infuses her story with hope and bravery that will inspire readers and stay with them long after turning the final page."--Aisha Saeed, author of the New York Times Bestselling Amal Unbound

Life is harsh in Chennai's teeming streets, so when runaway sisters Viji and Rukku arrive, their prospects look grim. Very quickly, eleven-year-old Viji discovers how vulnerable they are in this uncaring, dangerous world. Fortunately, the girls find shelter--and friendship--on an abandoned bridge. With two homeless boys, Muthi and Arul, the group forms a family of sorts. And while making a living scavenging the city's trash heaps is the pits, the kids find plenty to laugh about and take pride in too. After all, they are now the bosses of themselves and no longer dependent on untrustworthy adults. But when illness strikes, Viji must decide whether to risk seeking help from strangers or to keep holding on to their fragile, hard-fought freedom.

* “The four individual children and their tightknit relationship are portrayed with conviction and finesse. Written in the form of a letter from Viji to her sister, the affecting narrative transports readers to a faraway setting that becomes vivid and real. While the young characters face unusually difficult challenges, together they find the courage they need to move forward. The author of A Time to Dance, Venkatraman offers an absorbing novel of love, loss, and resilience.”—Booklist, starred review

* “In her stellar middle grade debut, Venkatraman brings compassionate attention to the plight of India’s homeless children. . . . Venkatraman’s depiction of the streets of Chennai is a sensory experience. Her elegant prose tells a heartfelt, wholly captivating story while encouraging readers to consider larger issues including religion, poverty, and the caste system. An unforgettable tale of families lost, found, and moving ahead without leaving those they love behind.”—School Library Journal, starred review

* "Hopeful yet heartbreaking. . . . Venkatraman weaves a breathtaking story which takes the reader to the streets of India, where millions of homeless children fight to survive each day. . . . It is a story that must be told, and Venkatraman does a beautiful job describing everyday life and showing that a 'home' and 'family' doesn’t always correspond to a house with a white picket fence. This is a story that must be shared."—School Library connection, starred review

“An author’s note attests to the reality of all of the situations described in the book as having been drawn from first-person accounts; the tenderness of Viji’s love for her sister and her new ‘brothers’ will break hearts and inspire activist longings.”—The Bulletin of the Center for Children’s Books

“Readers will be captivated by the message of love and the true meaning of home and family. The book demonstrates how people, even if they are not related, can form a family.”—Voice of Youth Advocates