A Billion Black Anthropocenes or None (Forerunners: Ideas First) (Paperback) 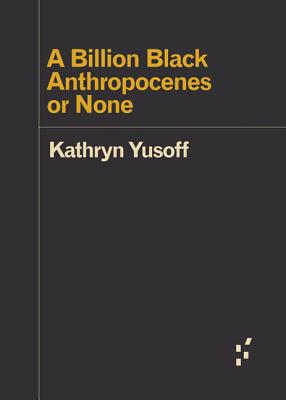 By Kathryn Yusoff
$12.00
Ships from our supplier - you choose to your home or to the store

Rewriting the “origin stories” of the Anthropocene

No geology is neutral, writes Kathryn Yusoff. Tracing the color line of the Anthropocene, A Billion Black Anthropocenes or None examines how the grammar of geology is foundational to establishing the extractive economies of subjective life and the earth under colonialism and slavery. Yusoff initiates a transdisciplinary conversation between feminist black theory, geography, and the earth sciences, addressing the politics of the Anthropocene within the context of race, materiality, deep time, and the afterlives of geology.

Kathryn Yusoff is Professor of Inhuman Geography at Queen Mary University of London.

"A historically grounded and embodied understanding of geological transformation."—Antipode

"A Billion Black Anthropocenes or None could be summed up as a new history of the relationship between geology and subjectivity. This is by no means a novel concern – pre-black conscious writers such as WEB du Bois, black conscious writers including Frantz Fanon and Steve Biko, and their contemporaries and successors, for example Sylvia Wynter, Achille Mbembe and Kathrine McKittrick, have all grappled with the complex human-citizenship-land question. What makes Kathryn Yusoff’s book different is that it addresses these questions via contemporary concerns about the Anthropocene, the name given to the new geological epoch. Unlike previous epochs, such as the Pleistocene, which was marked by climatological planetary impacts – in this case repeated glaciations, which is why it’s also called the Ice Age – the Anthropocene is marked by human interference. "—New Frame

"Black studies scholars and geographers interested in the environment and materiality alike are likely to find the text useful in asserting that a grammar of biopolitics cannot adequately account for the social history and present of Black people’s proximity to death, from the silver mines of sixteenth-century Potosí to the toxic environs of late-capitalist US urbanity. "—ISLE

"In steering away from specific dates, Yusoff engages with concepts of geologic time by connecting struggles for equity and justice with some of the foundational epistemologies that are normally used to connect historical and physical geology: uniformitarianism, the vastness of time, and the trade of time for location."—Nature Geoscience

"Yusoff’s Billion Black Anthropocenes calls to mind this multitude of examples of colonialism and attendant resource exploitation, reminding us that the Anthropocene is simply the latest in a centuries-long string of world destructions enacted by western colonizers."—Inhabiting the Anthropocene