Empire of the Scalpel: The History of Surgery (Hardcover) 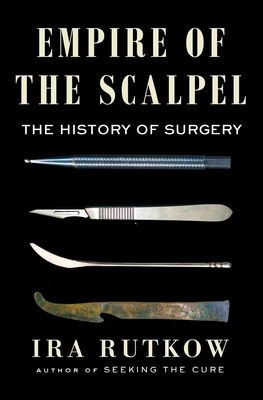 From an eminent surgeon and historian comes the “by turns fascinating and ghastly” (The New York Times Book Review, Editors’ Choice) story of surgery’s development—from the Stone Age to the present day—blending meticulous medical research with vivid storytelling.

There are not many life events that can be as simultaneously frightening and hopeful as a surgical operation. In America, tens-of-millions of major surgical procedures are performed annually, yet few of us consider the magnitude of these figures because we have such inherent confidence in surgeons. And, despite passionate debates about health care and the media’s endless fascination with surgery, most of us have no idea how the first surgeons came to be because the story of surgery has never been fully told. Now, Empire of the Scalpel elegantly reveals surgery’s fascinating evolution from its early roots in ancient Egypt to its refinement in Europe and rise to scientific dominance in the United States.

From the 16th-century saga of Andreas Vesalius and his crusade to accurately describe human anatomy while appeasing the conservative clergy who clamored for his burning at the stake, to the hard-to-believe story of late-19th century surgeons’ apathy to Joseph Lister’s innovation of antisepsis and how this indifference led to thousands of unnecessary surgical deaths, Empire of the Scalpel is both a global history and a uniquely American tale. You’ll discover how in the 20th century the US achieved surgical leadership, heralded by Harvard’s Joseph Murray and his Nobel Prize–winning, seemingly impossible feat of transplanting a kidney, which ushered in a new era of transplants that continues to make procedures once thought insurmountable into achievable successes.

Today, the list of possible operations is almost infinite—from knee and hip replacement to heart bypass and transplants to fat reduction and rhinoplasty—and “Rutkow has a raconteur’s touch” (San Francisco Chronicle) as he draws on his five-decade career to show us how we got here. Comprehensive, authoritative, and captivating, Empire of the Scalpel is “a fascinating, well-rendered story of how the once-impossible became a daily reality” (Kirkus Reviews, starred review).

Ira Rutkow is a general surgeon and historian of American medicine. He also holds a doctorate of public health from Johns Hopkins University. Among Dr. Rutkow’s books are several encyclopedic works on surgical history: Surgery: An Illustrated History, named a New York Times Notable Book of the Year; American Surgery: An Illustrated History; and a two-volume bibliography, The History of Surgery in the United States, 1775-1900. He is the author of three other books, Seeking the Cure, James A. Garfield, and Bleeding Blue and Gray. Dr. Rutkow and his wife divide their time between New York City and a farm in the Hudson Valley.

"By turns fascinating and ghastly. . . . [Readers] will learn that the history of modern surgery is the history of the rise of the modern world, with all that has involved—not just science and technology but also politics, architecture, demographics and institutions. . . .[Empire of the Scalpel] shows how the history of surgery is about so much more than just science and new surgical procedures. All human life is there.” —New York Times Book Review, Editors' Choice

“Unexpected and fascinating perspectives not only on the operating table but also on war, science, society, and human behavior, as well as the biggest questions of all: how we die, how we kill, how we heal, and how we cure.” —The American Scholar

"Rutkow has a raconteur’s touch, and he is especially good on the rugged, difficult, obstinate characters that propelled the field’s advance during a heroic age of medicine.” —The San Francisco Chronicle

"Empire of the Scalpel is a complex history of giant steps made in surgery and a heads-up for what to expect next." —Winnipeg Free Press

"Rutkow, who has written multiple books about surgery, offers both useful historical context and deserved recognition to the key figures. . . . A fascinating, well-rendered story of how the once-impossible became a daily reality." —Kirkus (starred review)

“[A] smart survey from historian and surgeon Rutkow. . . . He’s at his best when delving into the stories behind specific breakthroughs—as with his colorful description of the first surgery that used anesthesia, in 1846 Massachusetts. The result is a unique take on the history of medicine.” —Publishers Weekly