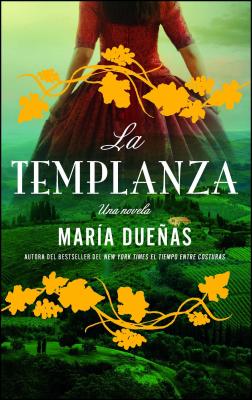 The New York Times bestselling author of The Time in Between returns with a magnificent new novel set in 1860s Mexico City, Havana, and Spain about a self-made man who loses his fortune overnight but finds his destiny as he works to restore a legendary vineyard to its former glory, and to win the love of the combative widow who once owned the property.

Mauro Larrea sees the fortune that he had built after years of hardship and toil come crashing down on the heels of a calamitous event. Swamped by debts and uncertainty, he gambles the last of his last money in a daring move that offers him the opportunity to resuscitate his fortune. But when the unsettling Soledad Montalvo, wife of a London wine merchant, comes into his life, her passionate intensity lures him toward an unanticipated future.

La Templanza spans diverse worlds, from the young Mexican republic to magnificent colonial Havana; from the West Indies to the Jerez of the second half of the nineteenth-century, when its wine trade with England turned the Andalusian city into a legendary cosmopolitan enclave. A novel replete with glories and defeats, with silver mines, family intrigues, vineyards, and splendid places whose grandeur has faded in time, La Templanza is a story of resilience in the face of adversity, of a lifeline forever altered by the force of passion.

María Dueñas holds a PhD in English philology. After two decades in academia, she broke onto the literary scene in 2009 with the publication of the New York Times bestselling novel The Time in Between, followed by The Heart Has Its Reasons in 2012. Both novels became international bestsellers and have been translated into thirty-five languages. The television adaptation of The Time in Between earned critical and international acclaim. The Vineyard is her third novel.


"A wonderful novel, in the old and good tradition, with intrigue, love, mystery and tender, audacious and clean-cut characters."
— Mario Vargas Llosa, recipient of the 2010 Nobel Prize in Literature

"María Dueñas is a true storyteller. She weaves a spell, conjuring the heat and the glamour, the hardship and the thrill of Morocco and Spain in the late 1930s."
— Kate Morton, New York Times bestselling author