The Trials of Harry S. Truman: The Extraordinary Presidency of an Ordinary Man, 1945-1953 (Hardcover) 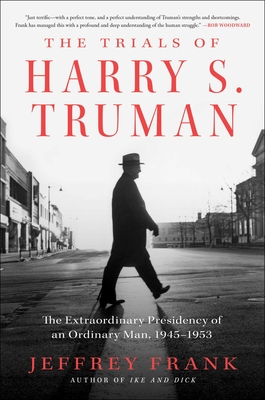 A New Yorker Best Book of the Year

Jeffrey Frank, author of the bestselling Ike and Dick, returns with the first full account of the Truman presidency in nearly thirty years, recounting how so ordinary a man met the extraordinary challenge of leading America through the pivotal years of the mid-20th century.

The nearly eight years of Harry Truman’s presidency—among the most turbulent in American history—were marked by victory in the wars against Germany and Japan; the first use of an atomic weapon; the beginning of the Cold War; creation of the NATO alliance; the founding of the United Nations; the Marshall Plan to rebuild the wreckage of postwar Europe; the Red Scare; and the fateful decision to commit troops to fight in Korea.

Historians have tended to portray Truman as stolid and decisive, with a homespun manner, but the man who emerges in The Trials of Harry S. Truman is complex and surprising. He believed that the point of public service was to improve the lives of one’s fellow citizens, and was disturbed by the brutal treatment of African Americans. Yet while he supported stronger civil rights laws, he never quite relinquished the deep-rooted outlook of someone with Confederate ancestry reared in rural Missouri. He was often carried along by the rush of events and guided by men who succeeded in refining his fixed and facile view of the postwar world. And while he prided himself on his Midwestern rationality, he could act out of emotion, as when, in the aftermath of World War II, moved by the plight of refugees, he pushed to recognize the new state of Israel.

The Truman who emerges in these pages is a man with generous impulses, loyal to friends and family, and blessed with keen political instincts, but insecure, quick to anger, and prone to hasty decisions. Archival discoveries, and research that led from Missouri to Washington, Berlin and Korea, have contributed to an indelible, and deeply human, portrait of an ordinary man suddenly forced to shoulder extraordinary responsibilities, who never lost a schoolboy’s romantic love for his country, and its Constitution.

Jeffrey Frank was a senior editor at The New Yorker, the deputy editor of The Washington Post’s Outlook section, and is the author of Ike and Dick. He has published four novels, among them the Washington Trilogy—The Columnist, Bad Publicity, and Trudy Hopedale—and is the coauthor, with Diana Crone Frank, of a new translation of Hans Christian Andersen stories, which won the 2014 Hans Christian Andersen Prize. He is a contributor to The New Yorker, and has written for The New York Times, The Washington Post, The Wall Street Journal, The Guardian, Bookforum, and Vogue, among other publications.

“Frank gives us this ebullient, bookish, often cantankerous man in full... Frank does not so much puncture the Truman myth as let out just enough air to settle the man back to earth.” —The New York Times (Editors' Choice)

“….thoughtfully explores the unlikely triumph of one of the nation’s most consequential presidencies. Frank’s prowess as a storyteller brings to life the major episodes of Truman’s tenure while drawing an intimate portrait of his internal struggles as he clashed with foreign and domestic rivals and led a group of heavyweights that came to establish a winning blueprint for the Cold War.” —The Washington Post

"[Frank’s] revisionism is meant to illuminate, not debunk; he believes that a more realistic account of Truman’s limits will lead to a deeper appreciation of his greatness. …. With a new kind of Cold War heating up and the foibles of our chief executives an ever more intense matter of scrutiny and concern, [the] book is timely in ways he couldn’t have imagined when he started it. … rigorously researched, thought-provoking and, not least, a pleasure to read." – Frank Gannon, The Wall Street Journal

"Frank is a brave writer for having taken on a subject that historian David McCullough had handled so exhaustively in Truman, his 1992 Pulitzer Prize–winning biography of the 33rd president. So it is a pleasure to report that Frank’s courage is to be applauded, since he has written a remarkably engaging narrative of what Harry Truman was like as president and the challenges he faced. Truman had a more eventful presidency than most occupants of the Oval Office have had, and Frank views the man and his virtues and flaws with an acute empathy that never slips into sugary sentimentality. Nothing tested Truman as much as the Korean War did, and what Dwight Eisenhower, his successor, wrote at the time bears a sobering truth: 'If his wisdom could only equal his good intent!!” — Air Mail

"Movingly depicted... Frank has made a case for a man who, when given the responsibility of the entire country, was able to thread many needles, based on personal confidence, trust in the right people, and healthy relationships with family and friends." —The Los Angeles Review of Books

"Frank is drawn to the human side of this story: the backroom sniping, the jockeying for position, the personality clashes, and the diplomatic pageantry that produced the postwar world order…. [He] recognizes a precious gift to the biographer: a subject who, miraculously and generously, takes the time to write down his innermost feelings and thoughts… For all the things that happened during Truman’s Presidency, Frank argues, the events that were averted deserve to be part of the historical discussion, too. Above all, the world did not descend into a nuclear-armed Third World War, a prospect that loomed over every minute of Truman’s Presidency and pervades every page of Frank’s book." — Beverly Gage, The New Yorker

"Truman made his mark not just in the organization-building… that helped transform the global order. He also broke political norms. Where and why he did is worth revisiting during a post-Trump period when Americans are reexamining the guardrails meant to guide public life and presidential power—and when the future of the country’s political parties seems more fraught than ever." — John Dickerson, The Atlantic

"Frank’s talent as a novelist is on display here. With this refreshing and much needed reexamination of Truman's life, Frank establishes himself as a source of value to any reader interested in mid-twentieth century America." —Richard Lawrence Miller, author of Truman: The Rise to Power and Lincoln and His World

“A remarkable window into America's great Cold War president. Because Frank is such a sublime writer, his heroic recounting of the Truman presidency is dazzling. This is intellectual biography at its absolute finest." — Douglas Brinkley is the Katherine Tsanoff Brown Chair in Humanities and Professor of History at Rice University and author of American Moonshot:  John F. Kennedy and the Great Space Race

“Frank’s lively account of Truman’s time in office evokes a pivotal time with vivid, carefully-gleaned detail. And it’s an appropriate book for this political moment, when a lot of us are hoping that an ordinary man will turn out to be an extraordinary president.” —Adam Hochschild, author of ten books, including Rebel Cinderella

"A fresh, deeply human perspective... Frank’s sensitive, empathetic portrait gave me a new appreciation for this innately decent, caring man, who, for all his stumbles, was committed to making a better world for those who lived in it."— Lynne Olson, New York Times bestselling author of Citizens of London and Madame Fourcade's Secret War

"Pitch-perfect…. clear-eyed, wise, and compassionate—in a word, humane. Jeffrey Frank’s lovely book lets us see up close how Harry Truman’s decisions, sometimes considered, sometimes not, laid the foundation for the kind of world power the United States is today." —Louis Menand, Pulitzer Prize winning author of The Free World and The Metaphysical Club

"Massively researched, engagingly written… An intimate, revealing history of a time, and of a president, whose straightforward persona masked a more complicated, sometimes tortured man during a truly extraordinary period.” — Robert L. Messer, author of The End of an Alliance: James F. Byrnes, Roosevelt, Truman and the Origins of the Cold War

“An intimate, vivid portrait of our 33rd president and his times….  a chance to rediscover one of the most improbable and compelling figures in American history.” — Rick Atkinson, Pulitzer Prize-winning author of The Liberation Trilogy and The British Are Coming.

"...looks with refreshing directness at both Truman’s strengths and weaknesses.. readers seeking an even-handed account of the major issues in his administration need look no further than this solid volume." — Steve Donoghue, Christian Science Monitor

"An absorbing reexamination of [his] two-term presidency. … provides further depth and nuance to the character dynamics of Truman and his administration…..A well-researched, engagingly human portrait of this complex mid-20th-century political leader." — Kirkus Reviews

"Frank astutely analyzes the geopolitics Truman confronted while conveying his character in elegant, evocative prose… The result is a discerning portrait of a president who achieved a lot just by muddling through." — Publishers Weekly

"Frank (novelist and former editor at The New Yorker and the Washington Post) crafts an expansive, appreciative review of a consequential, yet once-underestimated president."—Library Journal