Memories of a Gay Catholic Boyhood: Coming of Age in the Sixties (Hardcover) 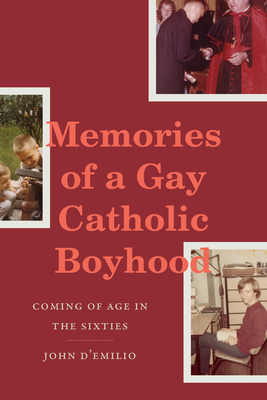 John D'Emilio is one of the leading historians of his generation and a pioneering figure in the field of LGBTQ history. At times his life has been seemingly at odds with his upbringing. How does a boy from an Italian immigrant family in which everyone unfailingly went to confession and Sunday Mass become a lapsed Catholic? How does a family who worshipped Senator Joseph McCarthy and supported Richard Nixon produce an antiwar activist and pacifist? How does a family in which the word divorce was never spoken raise a son who comes to explore the hidden gay sexual underworld of New York City? Memories of a Gay Catholic Boyhood is D'Emilio's coming-of-age story in which he takes readers from his working-class Bronx neighborhood to an elite Jesuit high school in Manhattan to Columbia University and the political and social upheavals of the late 1960s. He shares his personal experiences of growing up in a conservative, tight-knit, multigenerational family, how he went from considering entering the priesthood to losing his faith and coming to terms with his same-sex desires. Throughout, D'Emilio outlines his complicated relationship with his family while showing how his passion for activism influenced his decision to use research, writing, and teaching to build a strong LGBTQ movement. This is not just John D'Emilio's personal story; it opens a window into how the conformist baby boom decade of the 1950s transformed into the tumultuous years of radical social movements and widespread protest during the 1960s. It is the story of what happens when different cultures and values collide and the tensions and possibilities for personal discovery and growth that emerge. Intimate and honest, D'Emilio's story will resonate with anyone who has had to chart their own path in a world they did not expect to find.

John D'Emilio is Emeritus Professor of History and Gender and Women's Studies at the University of Illinois, Chicago, and the author of many books, including The World Turned: Essays on Gay History, Politics, and Culture, also published by Duke University Press; Lost Prophet: The Life and Times of Bayard Rustin; Sexual Politics, Sexual Communities: The Making of a Homosexual Minority in the United States, 1940-1970​; and Queer Legacies: Stories from Chicago's LGBTQ Archives. He is a Guggenheim Fellow and a National Endowment of the Humanities Fellow, and he was a finalist for the National Book Award for Lost Prophet, which won the American Library Association's Stonewall Book Award for nonfiction. D'Emilio was inducted into the Chicago LGBT Hall of Fame in 2005 and was named Chicagoan of the Year by the Chicago Tribune in 2004. He lives in Chicago.