The One Ann Only: Wit and Wisdom from Texas Governor Ann Richards (Hardcover) 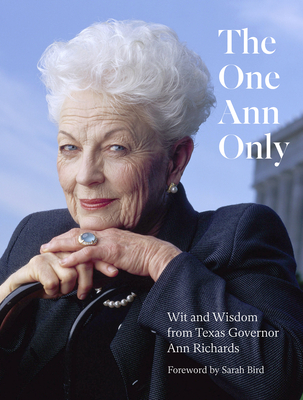 One of the most unforgettable politicians in American history, Dorothy Ann Willis Richards (1933–2006) was the first woman to be elected, in her own right, governor of Texas; she served from 1991 to 1995. Richards transformed the state government to resemble the diverse population of Texas, appointing a record number of women, people of color, people with disabilities, and LGBTQ community members to Texas boards and state agencies.

Governor Richards was known as much for her humor as for her politics. Her witty one-liners, shrewdly delivered with a thick Waco accent, could bring down the house. Add in her striking appearance—big white hair and turquoise eyes—and her presence left an indelible impression.

With a thoughtful foreword by award-winning novelist Sarah Bird, The One Ann Only presents Ann’s famous witticisms alongside striking images throughout her life and political career by Texas photographers. This little book can serve as a Texas-sized inspiration to everyone, especially current and future public servants, teachers, parents, and people in recovery.

Sarah Bird is an award-winning novelist and journalist. She has written eleven books, including Daughter of a Daughter of a Queen and A Love Letter to Texas Women.

The One Ann Only is a visual love letter to Richards fans, and an open-door welcome for fans-to-be...there’s something engrossing about each photograph in the book, perhaps because it doesn’t seem possible to take a bad picture of Richards—she’s that photogenic...I found that sitting with The One Ann Only in my lap, absorbed by the pictures and quotes, that what the book offers—through Ann’s wide smile—is an aura of hope.
— Texas Observer