Did You Ever Have a Family (Paperback) 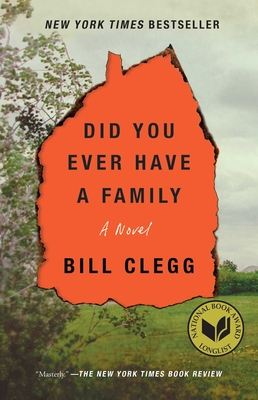 The stunning debut novel from bestselling author Bill Clegg is a magnificently powerful story about a circle of people who find solace in the least likely of places as they cope with a horrific tragedy.

On the eve of her daughter’s wedding, June Reid’s life is upended when a shocking disaster takes the lives of her daughter, her daughter’s fiancé, her ex-husband, and her boyfriend, Luke—her entire family, all gone in a moment. June is the only survivor.

Alone and directionless, June drives across the country, away from her small Connecticut town. In her wake, a community emerges, weaving a beautiful and surprising web of connections through shared heartbreak.

From the couple running a motel on the Pacific Ocean where June eventually settles into a quiet half-life, to the wedding’s caterer whose bill has been forgotten, to Luke’s mother, the shattered outcast of the town—everyone touched by the tragedy is changed as truths about their near and far histories finally come to light.

Elegant and heartrending, and one of the most accomplished fiction debuts of the year, Did You Ever Have a Family is an absorbing, unforgettable tale that reveals humanity at its best through forgiveness and hope. At its core is a celebration of family—the ones we are born with and the ones we create.

Bill Clegg is a literary agent in New York and the author of the bestselling memoirs Portrait of an Addict as a Young Man and Ninety Days. The author of the novels Did You Ever Have a Family and The End of the Day, he has written for the New York Times, Lapham’s Quarterly, New York magazine, The Guardian, and Harper’s Bazaar.

PRAISE FOR DID YOU EVER HAVE A FAMILY

“Masterly…The vignettes provide deft reprieves, a mosaic of a community and its connection to the tragedy. And connection—the way people and their lives fuse—is this novel’s main concern."
— The New York Times Book Review

"An attempt to map how the unbearable is borne, elegantly written and bravely imagined."
— Kirkus Reviews, starred review

“A propulsive but tightly crafted narrative… reveal[s] the fine-grained sorrows of the human condition, rendered in polished, quietly captivating prose. As the stories emerge, so do their connections—and the idea of connection itself…. Readers may come to this debut novel because of agent/memoirist Clegg’s reputation, but they’ll stay for the stellar language and storytelling. Highly recommended.”
— Library Journal, starred review

“In this sorrowful and deeply probing debut novel, literary agent and memoirist Clegg (Portrait of an Addict as a Young Man) delivers a story of loss and its grueling aftermath . . . it's Clegg's deft handling of all the parsed details—missed opportunities, harbored regrets, and unspoken good intentions—that make the journey toward redemption and forgiveness so memorable.”
— Publishers Weekly, starred review

"Clegg is both delicately lyrical and emotionally direct in this masterful novel, which strives to show how people make bearable what is unbearable, offering consolation in small but meaningful gestures. Both ineffably sad and deeply inspiring, this mesmerizing novel makes for a powerful debut."
— Booklist, starred review

"I marveled my way through Did You Ever Have a Family, at not just the masterful writing and storytelling, but at the emotional authenticities of every persuasion. It's a wondrous thing when a writer gets things this right, this absorbing, and this beautiful. Bravo, Bill Clegg, and thank you."
— Bestselling author Elinor Lipman

"Full of small-town secrets and whispers, Bill Clegg has woven a richly textured tale of loss and healing. This is a deeply optimistic book about the power of human sympathy to pull us from the wreckage of our fate."
— Man Booker Prize-winning novelist Anne Enright

"The force, range, and scope of Bill Clegg’s Did You Ever Have a Family will grab you with its opening lines, and won’t let go until its final one. I can’t recall another novel that so effortlessly weds a nuanced, lyrical voice to an unflinching vision of just how badly things can go for people. I read it deep into the night, all the way through, telling myself it was getting late, I could finish the book in the morning. I finished it that night, however, slept a few hours, and then, in the morning, started reading it again."
— Pulitzer Prize-winning author Michael Cunningham

"Like the question it poses, Did You Ever Have a Family is brutally direct yet it's got an enormous symbolic power. You hold in your hands a great book of kindness—every restrained, exquisite sentence comes loaded for bear. It's been a lot of years since a novel has so moved me. Number Bill Clegg among that endangered species: major American writer."
— National Book Critics Circle Award–winning author Darin Strauss

“One of the year's most hotly anticipated books.”
— Shelf Awareness

“Bill Clegg’s Did You Ever Have a Family limns the far reaches of grief.”
— Vanity Fair

"Clegg is a gimlet-eyed observer and is masterly at deftly sucking in the reader as he fashions an emotional tsunami into a profound, mesmerizing description."
— The Sunday Times (UK)

“Clegg has produced a moving, clever novel that subtly dissects the relationships between mothers and their children, lovers, neighbors and strangers. Did You Ever Have a Family is an unpretentious work about how a life can be salvaged from the ashes. Bill Clegg is an author to watch.”
— The Times (UK)

"A quiet novel of devastating power. Clegg has drawn a tale of prodigious tenderness and lyricism.... that reveals the depths of the human heart. [Did You Ever Have a Family] is a wonderful and deeply moving novel, which compels us to look directly into the dark night of our deepest fears and then quietly, step by tiny step, guides us towards the first pink smudges of the dawn."
— The Guardian (UK)

“A quiet, measured and engrossing piece…. a poignant portrait of fractured family lives. Clegg’s prose conveys the numbed grieving state of mind, its quietness fitting its subject of deep clear-eyed sadness…. It approaches grief gently and, in the end, its gentleness is its triumph.”
— The Daily Telegraph (UK)

“This first novel arrives with a shout…Clegg covers the full spectrum of human emotion in this beautifully nuanced story."
— BBC, “Ten Books to Read in September”

“In trying to tell the faceted story of a single moment as seen by a hundred different eyes, Clegg has attempted something daring. And the wonder of it is how often his experiment succeeds...”
— NPR

“In measured prose, Clegg unspools the stories of June and the other survivors as they face unimaginable horror and take their first halting steps toward hope and community."

"Did You Ever Have a Family is the first full-length foray into fiction for Bill Clegg... but it reads like the quietly assured work of a veteran novelist.... it’s rare to find a book that renders unimaginable loss in such an eloquent, elegant voice."
— Entertainment Weekly, A- review

“Illuminate[s] how grief, guilt, regrets and the deep need for human connection are woven into the very flammable fabric of humanity…. Clegg's emotionally direct, polished novel is at once heartrending and heartening. It's a gift to be able to write about such dark stuff without succumbing to utter bleakness, and to infuse even scorching sadness with a ray of hopefulness.”
— Los Angeles Times

“How do you continue if all at once, everyone you love has been wiped away? With crosscutting perspectives and a voluminous cast of characters, Clegg constructs a layered narrative with some dexterous plot twists.”
— Boston Globe

"This isn’t your typical mystery, it’s something better: a real-life thriller in which resolution takes the form of acceptance. While [Clegg] never suggests anything as simplistic as closure for these tormented souls, he manages to find ways for them to move forward from this tragedy, making it seem a little less random than it did at the beginning, and that in and of itself is a kind of mercy."
— San Francisco Gate

"[Did You Ever Have a] Family is a quiet and beautifully written novel that will keep readers turning the pages…. There is no resignation here. Rather, Clegg seems to say, it is the courage to intervene in another’s life that defines the notion of family.”

“Heartbreaking but quietly optimistic, Did You Ever Have a Family is a rumination on horrific loss, healing, forgiveness, and the families we choose for ourselves.”
— Buzzfeed, “19 Awesome New Books You Need To Read This Fall” (2015)

“[Did You Ever Have A] Family melds several grieving voices into a detailed mosaic of a town split between locals and weekenders, a mystery in which the stakes really matter, and a recovery story more original than Clegg’s own.”
— Vulture, “7 Books You Need to Read This September” (2015)