The Strange Career of Porgy and Bess: Race, Culture, and America's Most Famous Opera (Paperback) 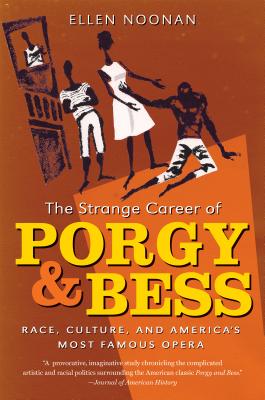 Created by George Gershwin and DuBose Heyward and sung by generations of black performers, Porgy and Bess has been both embraced and reviled since its debut in 1935. In this comprehensive account, Ellen Noonan examines the opera's long history of invention and reinvention as a barometer of twentieth-century American expectations about race, culture, and the struggle for equality. In its surprising endurance lies a myriad of local, national, and international stories.
For black performers and commentators, Porgy and Bess was a nexus for debates about cultural representation and racial uplift. White producers, critics, and even audiences spun revealing racial narratives around the show, initially in an attempt to demonstrate its authenticity and later to keep it from becoming discredited or irrelevant. Expertly weaving together the wide-ranging debates over the original novel, Porgy, and its adaptations on stage and film with a history of its intimate ties to Charleston, The Strange Career of "Porgy and Bess" uncovers the complexities behind one of our nation's most long-lived cultural touchstones.