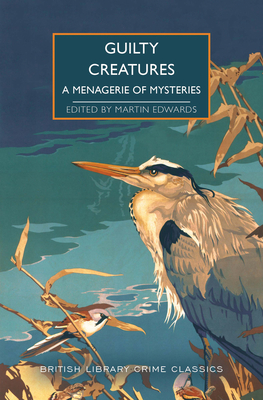 Feline friends, canine companions and aviary associates are often the truest reflections of their owners and have played a crucial role in classic crime fiction—be they detectives, or delinquents. Martin Edwards reaches into the British Library of Crime Classics to collect mysteries featuring an animal cohort.

Guilty Creatures celebrates an often-overlooked species of classic crime fiction. Since the dawn of the crime fiction genre, animals of all kinds have played a memorable part in countless mysteries, and in a variety of roles: the perpetrator, the key witness, the sleuth's trusted companion. This collection of fourteen stories corrals plots centered around cats, dogs, and insects alongside more exotic incidents involving gorillas, parakeets, and serpents—complete with a customary shoal of red herrings.

The collection includes an introduction on animals in detective fiction by Martin Edwards. "From the first detective story, Edgar Allan Poe's locked room puzzle 'The Murders in the Rue Morgue' onwards, animals, birds, and insects have played a memorable part in countless mysteries, and in a wide variety of ways. Count Fosco, the brilliantly characterized villain in Wilkie Collins's The Woman in White was surrounded by "a cockatoo, two canary-birds and a whole family of white mice," while the hound of the Baskervilles famously terrorised Dartmoor in Arthur Conan Doyle's superb Sherlock Holmes novel. Since then, many crime writers have written about members of the animal kingdom."

Martin Edwards is an award-winning crime writer best known for two series of novels set in Liverpool and the Lake District. He is series consultant for British Library Crime Classics, the Vice Chair of the Crime Writers' Association, and President of the Detection Club. The Golden Age of Murder, his study of the Detection Club, was published in 2015 to international acclaim, and has been nominated for both the Edgar and Agatha awards for the year's best book about the genre. He received the CWA 2020 Diamond Dagger Award for sustained excellence in crime writing and significant contributions to the genre, joining the ranks of Sue Grafton, Ian Rankin, and Lee Child.

"[An] excellent reprint anthology from Edwards featur[ing] animals in a variety of roles, including killer, witness, and source of clues...[Guilty Creatures is] another winner from the British Library of Crime Classics." — Publishers Weekly, Starred Review